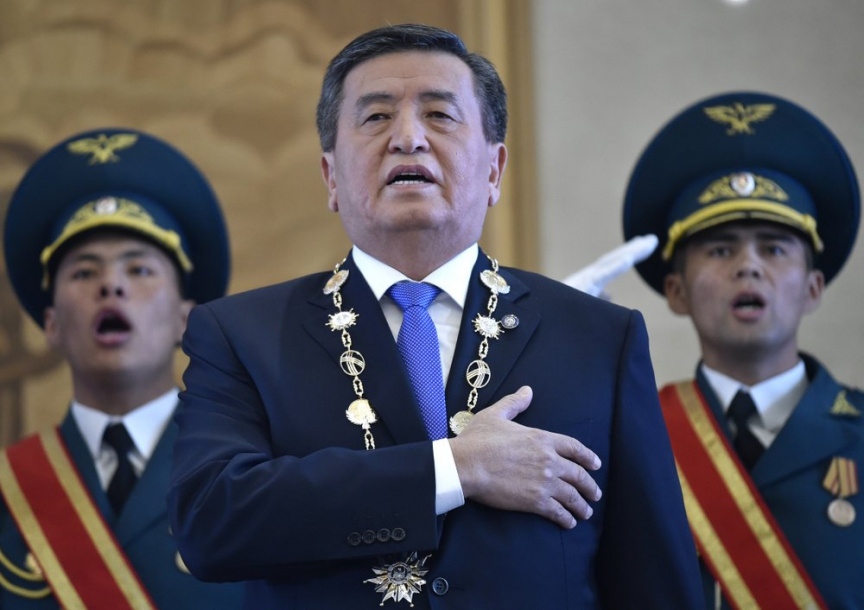 FILE - In this file photo taken on Friday, Nov. 24, 2017, President-elect Sooronbai Jeenbekov sings the national anthem during the presidential inauguration ceremony in Bishkek, Kyrgyzstan. Kyrgyzstan President Sooronbai Jeenbekov announced his resignation on Thursday, Oct. 15, 2020 in a bid to end the turmoil that has engulfed the Central Asian nation after a disputed parliamentary election. In a statement released by his office, Jeenbekov, who has faced calls to step down from protesters and political opponents, said that holding on to power wasn't "worth the integrity of our country and agreement in society." (Vyacheslav Oseledko/Pool Photo via AP, File)

MOSCOW (AP) — Kyrgyzstan’s embattled President Sooronbai Jennbekov said Thursday he was resigning following protests over a disputed parliamentary election, the third time in 15 years that a leader of the Central Asian country has been ousted by a popular uprising.

Supporters of Jennbekov’s rival, newly appointed Prime Minister Sadyr Zhaparov, rallied in the capital of Bishkek and threatened to storm government buildings if he is not elevated to acting president. Under the constitution, the speaker of parliament would be next in line, but he refused to serve as caretaker leader, according to Zhaparov, who claimed the top office.

The fast-moving events capped a government crisis that was dizzying even by Kyrgyzstan’s chaotic, clan-influenced politics.

The resignations of the president and the parliament speaker’s apparent refusal to succeed him followed unrest that gripped the country of 6.5 million people on the border with China since the Oct. 4 parliamentary election that was swept by pro-government parties.

Supporters of opposition groups dismissed the results, pointing at vote-buying and other irregularities, and took over government buildings hours after the polls closed. The protesters freed several opposition leaders, including Zhaparov, who was serving an 11-year jail term.

The Central Election Commission nullified the election results and rival regional clans begun jockeying for power, their supporters swarming the capital and occasionally clashing with each other, hurling stones.

Jeenbekov, who had introduced a state of emergency in Bishkek and deployed troops in the capital, dismissed calls to resign on Wednesday. But in a statement released Thursday by his office, he said that he feared violence if he stayed in power, noting that protesters were facing off against the police and the military.

“In this case, blood will be shed. It is inevitable,” Jeenbekov said. “I don’t want to go down in history as a president who shed blood and shot at his own citizens.”

Jeenbekov said the situation in Bishkek “remains tense” and that he didn’t want to escalate those tensions. He urged opposition politicians to get their supporters off the streets and “bring a peaceful life back to the people.”

Zhaparov’s supporters quickly besieged the parliament to discourage its speaker, Kanat Isayev, from taking over as acting president.

Soon after, Zhaparov told his jubilant supporters that he was now acting head of state because the speaker agreed not to become a caretaker president. The parliament is still scheduled to meet Friday to endorse the speaker’s refusal to serve as president and Zhaparov’s appointment to the post.

The curfew and the troops’ presence in Bishkek eased tensions in the city, where residents feared the violence and looting that accompanied previous uprisings and had been forming vigilante groups to protect their property. Stores and banks that were closed last week have reopened.

As in the uprisings that ousted presidents in 2005 and 2010, the current unrest has been driven by clan rivalries that dominate the country’s politics.

Kyrgyzstan, one of the poorest countries to emerge from the former Soviet Union, is a member of Russia-dominated economic and security alliances, hosts a Russian air base and depends on Moscow’s economic support. It formerly was the site of a U.S. air base that was used in the war in Afghanistan.

Kremlin spokesman Dmitry Peskov on Thursday said “a certain pause” in providing support to Kyrgyzstan “makes sense” because “there is no government as such, as far as we see.”

Protesters erupt in Kyrgyzstan after election