Brits accused in beheading of hostages plead not guilty 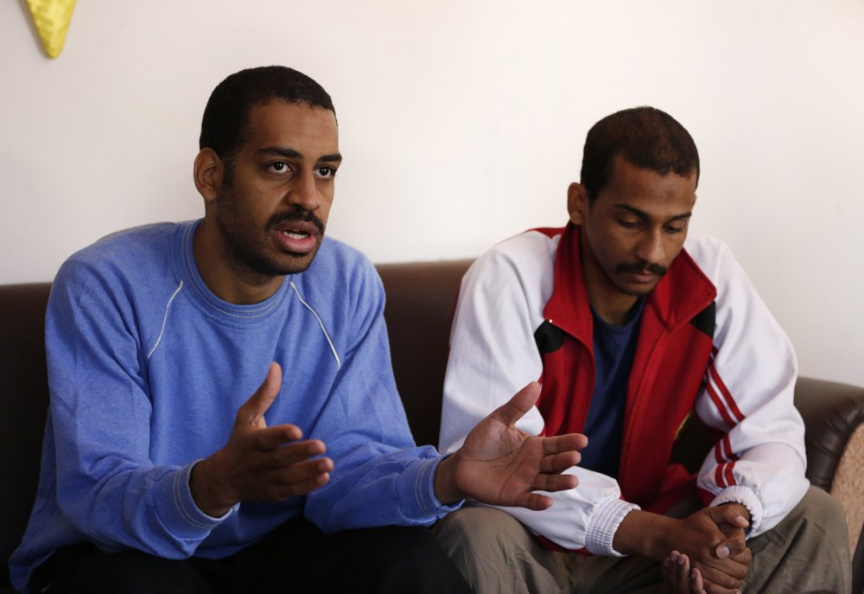 In this March 30, 2019, file photo, Alexanda Amon Kotey, left, and El Shafee Elsheikh, who were allegedly among four British jihadis who made up a brutal Islamic State cell dubbed "The Beatles," speak during an interview with The Associated Press at a security center in Kobani, Syria. (AP Photo/Hussein Malla, File)

El Shafee Elsheikh and Alexanda Kotey are identified by authorities as two of four men who were dubbed “the Beatles” by hostages, who took note of their British accents.

They were indicted this week in U.S. District Court in Alexandria, Virginia, on charges including hostage-taking resulting in death and providing material support to terrorists.

The indictment charges the men in connection with the deaths of four American hostages — journalists James Foley and Steven Sotloff and aid workers Peter Kassig and Kayla Mueller — as well as European and Japanese nationals who were also held captive.

At a brief hearing Friday in the court just outside Washington, D.C., the two men pleaded not guilty and requested a jury trial. No trial date was set after both men waived their right to a speedy trial because of the case’s complexity. A status hearing was set for Jan. 15 to set a trial date then.

The men appeared for both hearings via a video hookup from the Alexandria jail, handcuffed and wearing green jail jumpsuits. At their initial appearance Wednesday, the magistrate made an offhand remark that one of the two has tested positive for the coronavirus, but authorities have declined to confirm anything related to their medical status.

The men were transferred from American military custody to stand trial in civilian court after the United Kingdom agreed to share evidence it had on the men. The information was shared only after U.S. Attorney General William Barr promised that the men won’t face the death penalty.

Five of the eight counts each man faces, though, carry a mandatory minimum life prison sentence if convicted.

The charges capped a yearslong effort by U.S. authorities to bring to justice suspected members of the group known for beheadings and barbaric treatment of aid workers, journalists and other hostages in Syria.

Elsheikh and Kotey have been held since October 2019 in American military custody. They were captured in Syria one year before that by the U.S.-supported Syrian Democratic Forces.

Prosecutor Dennis Fitzpatrick said some of the evidence in the case is classified, which will require some pretrial hearings to be closed to the public to sort out how that evidence will be handled.

“This involves a long investigation involving multiple countries,” Fitzpatrick said when asked about the volume of evidence that must be weighed.

The indictment characterizes Kotey and Elsheikh, both of whom prosecutors say radicalized in London and left for Syria in 2012, as “leading participants in a brutal hostage-taking scheme” that targeted victims with mock executions, shocks with tasers, physical restraints and other brutal acts.

Trump says experimental drugs may have saved him