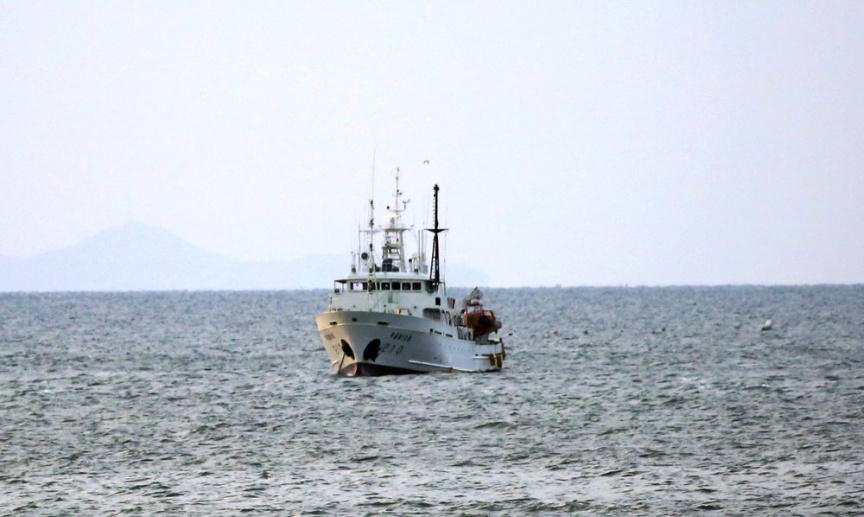 South Korea's government ship for a fishery guidance is seen near Yeonpyeong island, South Korea, Saturday, Sept. 26, 2020. South Korea said Saturday it will request North Korea to further investigate the killing of a South Korean government official who was shot by North Korean troops after being found adrift near the rivals' disputed sea boundary while apparently trying to defect. (Baek Seung-ryul/Yonhap via AP)

South Korea said earlier that North Korea sent a message including a rare apology by leader Kim Jong Un over the shooting death last week of a South Korean government official found on a floating object in North Korean waters. Officials in Seoul say the 47-year-old was likely attempting to defect to North Korea but little else is known about his motives.

“We urge the South side to immediately halt the intrusion across the military demarcation line in the West Sea that may lead to escalation of tensions,” the official Korean Central News Agency said. “It arouses our due vigilance as it may lead to another awful incident.”

It confirmed North Korea notified South Korea about its account of the incident on Friday. But it didn’t say whether the notification included Kim’s apology.

South Korea didn’t immediately respond. But it earlier said that coast guard ships searched waters near the boundary on Friday and Saturday in case the man’s body drifts back.

The poorly marked boundary is a source of animosities between the rival Koreas. They’ve fought at least three bloody naval skirmishes since 1999 and attacks blamed on North Korea killed 50 South Koreans there in 2010.

According to Friday’s North Korean message publicized by Seoul, North Korean troops shot the man because he refused to answer questions and attempted to flee. It also said the troops burned his floating object in line with strict anti-coronavirus rules, after failing to find his body.

Kim’s apology was seen as an attempt to soothe anti-North sentiment in South Korea that could make it him difficult for him to win concessions in any negotiations. Kim is currently struggling to overcome worsening economic woes caused by U.S.-led sanctions over his nuclear program and the pandemic that forced his country to close its border with China, its biggest trading partner.

While Kim’s apology could help reduce the risk of escalation of tensions between the rivals, conservatives in South Korea have launched a political offensive on liberal President Moon Jae-in for failing to prevent the man’s death.