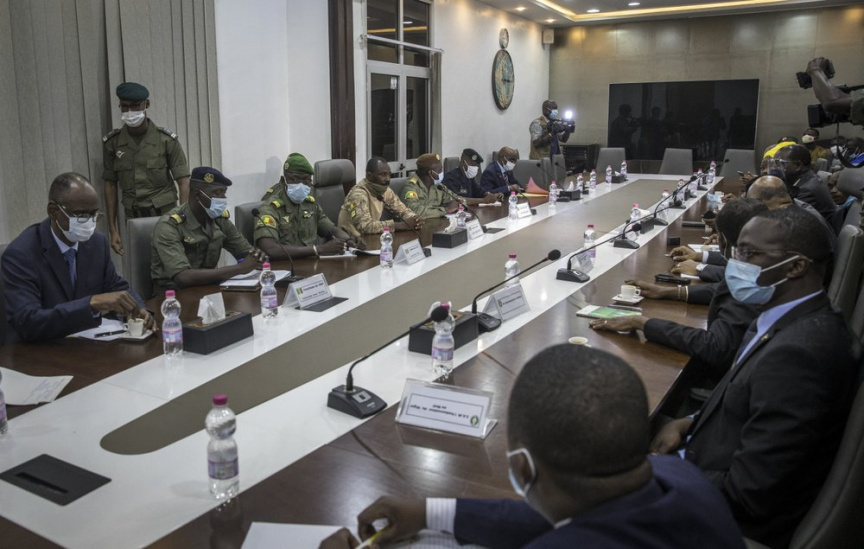 Representatives of the National Committee for the Salvation of the People, left of table, including Col. Assimi Goita, center of row, who has declared himself the group's leader, meet with a high-level delegation from the West African regional bloc known as ECOWAS, right of table, at the Ministry of Defense in Bamako, Mali, Saturday, Aug. 22, 2020. Top West African officials are arriving in Mali's capital following a coup in the nation this week to meet with the junta leaders and the deposed president in efforts to negotiate a return to civilian rule. (AP Photo)

The move came the same day that the junta made public a decree of its National Committee for the Salvation of the People that seems to overrule Mali’s constitution.

Keita was detained on Aug. 18 when a group of military officers arrested him and took him to Kati, 15 kilometers (9 miles) from the capital, Bamako. Later that night he resigned as president.

West African leaders from the 15-nation bloc knowns as ECOWAS have decried the overthrow of an elected leader and placed sanctions on Mali, shutting borders, halting financial flows and threatening further sanctions.

Keita was brought home around 2 a.m. Thursday by the military, according to a family member who spoke on condition of anonymity because they were not permitted to speak to the press. New guards were put on duty at the president’s residence and the junta must approve all visitors, the family member added.

His release comes as ECOWAS leader are meeting Friday in a virtual summit to further discuss the crisis in Mali. It could be a signal that Mali’s ruling junta, which wants ECOWAS to lift sanctions, are trying to meet some of the bloc’s demands.

The ECOWAS negotiating team met with Keita during their visit to Mali’s capital last week. Keita confirmed to them that he resigned voluntarily and “was no longer interested in returning to his former position.”

But the junta on Thursday released a degree signed Aug. 24 by junta leader Col. Assimi Goita that installs “provisional authority and lays the foundations for a rule of law.” It says the law is necessary given the dissolution of the National Assembly and the government.

It declares that the provisions of Mali’s 1992 constitution “apply as long as they are not contrary or incompatible with those of the present act.”

The main demand from ECOWAS, however, is at a standstill. West Africa’s leaders have demanded that Mali’s junta put in place an interim government, headed by a civilian or retired military officer, that would last no longer than one year before democratic elections are held to restore the country to civilian rule.

Mali’s junta has proposed staying in power for three years until Mali’s next election until 2023.

African countries and others have expressed fears that Mali’s upheaval could allow Islamic extremists that Mali has been fighting with heavy international support for seven years to extend their reach.

On Thursday, Mali’s military said four soldiers were killed and 12 others wounded in an ambush on an anti-poaching unit by insurgents in central Mali. Reinforcements have been dispatched to the site 25 kilometers (15 miles) from Konna, the military said.

France and EU to withdraw troops from Mali