Police to depart to the south, to produce Nasheed in Court 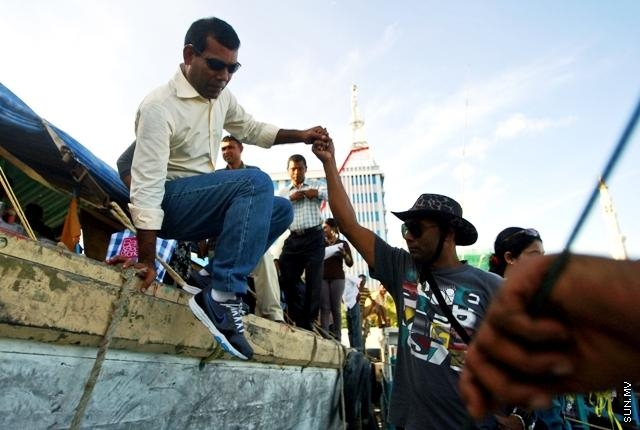 Sun Online has learned that the Police will commence efforts today, to execute the Court Order to produce former President Mohamed Nasheed in Court.

Nasheed failed to appear in Court last Monday for the hearing on the unconstitutional arrest of Chief Judge of Criminal Court Abdullah Mohamed.

A special team of Police will depart from Male’ at 4:00pm today to southern atolls in search of Nasheed.

Nasheed, who departed from Male’ last Monday on MDP campaign trip ‘Journey of Pledges’, arrived in Ga. Kooddoo this morning. He is planned to travel to Ga. Maamendhoo this afternoon.

A Police Media Official, when contacted to obtain more information on this operation, refused to comment on the issue.

Hulhumale’ Court ordered the Police yesterday to produce former President Mohamed Nasheed in Court at 4:00pm on Sunday, in accordance with article 5(b) of the regulation on producing persons in Court.

The regulation stipulates that persons can be produced in Court through the Department of Penitentiary and Rehabilitation Service (DPRS) or Maldives Police Service, following their non-compliance with Court summons without providing a valid reason.

Nasheed is charged under article 81 of the Penal Code, which states, “It shall be an offence for any public servant by reason of authority of office he is in to detain to arrest or detain in a manner contrary to Law innocent persons.

“Person guilty of this offence shall be subjected to exile or imprisonment for a period not exceeding 3 years or a fine not exceeding Mrf 2,000.00.”

If convicted, Nasheed will not be able to contest in 2013’s presidential election.