Warm welcome for first tourist to arrive on tourism 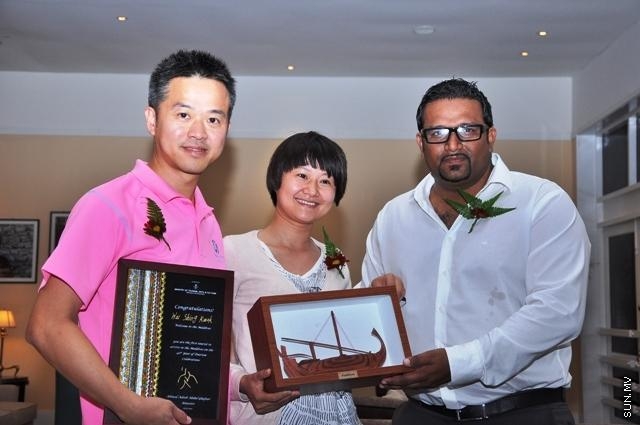 As Maldives marks the 40th anniversary of its tourism industry today, the first tourist to arrive has been received with a warm welcome at Ibrahim Nasir International Airport (INIA).

The first tourist to arrive after midnight last night was Sing Kok of Hong Kong, who arrived with his family at around 1:00am.

Sing Kok said via his interpreter that he was very happy to receive this honour, and that this was his first trip to the Maldives even though he had wanted to travel here since he was a child.

Tourism Minister told media while at the airport last night, that Kok and his family will received a free holiday in the Maldives.

Adheeb said that 40th anniversary celebrations will continue until 27 September 2013.

“We will organise various events, such as events to appreciate members of the industry and to present them with awards. We have begun the celebrations with the first tourist,” he said.

As part of the festivities, world tourism day will be marked in the Maldives at an international level, and every tourist will receive a stamp on his passport indicative of the tourism industry’s 40th anniversary.

Sessions will also be held at the National Museum to provide information about Maldivian culture and artefacts.

Tourism is the Maldives’ main industry, and was introduced in October 1972 with the opening of the first resort at K. Vihamanaafushi, which is now known as Kurumba Maldives.