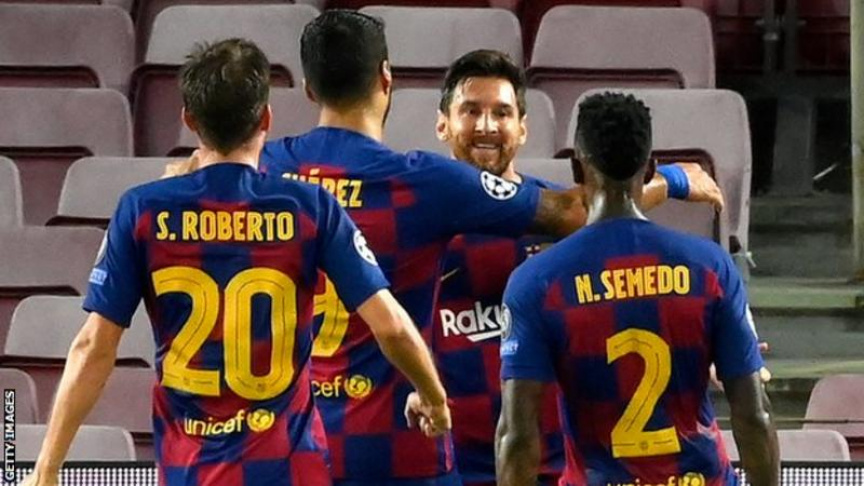 Lionel Messi celebrates with teammates on August 9, 2020, after scoring against Napoli in the Champions League round of 16 match. (Photo/BBC Sports)

Barcelona and Bayern Munich set up a tantalizing Champions League quarter-final as they both won last night. Barcelona won against Italian side Napoli, while Bayen cruised to victory against Chelsea.

Quique Setien's Barca scored three times through Clement Lenglet, Lionel Messi and Luis Suarez in an incident-packed first half, during which Messi was also denied a second for handball. With the tie evenly poised at 1-1 after February's first leg, Messi produced a mazy run and sublime finish to double his side's lead on the night following Lenglet's headed opener.

The Argentine had a possible second disallowed by VAR for handball but was later awarded a penalty by the video referee after being brought down by Kalidou Koulibaly, allowing Luis Suarez to step up to make it 3-0 on the night. The first-half drama was not over there, as Ivan Rakitic conceded a penalty for a foul on Mertens and Lorenzo Insigne converted for Napoli in the fifth minute of injury time.

In a significantly quieter second period, Lorenzo Insigne failed to test Marc-Andre ter Stegen with a header as the visitors chased a lifeline, while substitute Arkadiusz Milik was on the pitch for less than two minutes when he saw a goal ruled out for offside in the closing stages.

German champions Bayern Munich await Barca in the last eight after beating Chelsea 4-1 on Saturday to complete a whopping 7-1 aggregate victory. Having established a commanding 3-0 first-leg lead at Stamford Bridge back in February, Bayern quickly made it 5-0 on aggregate when Lewandowski - from the penalty spot - and Ivan Perisic scored inside 25 minutes at the Allianz Arena.

Chelsea pulled a goal back through Tammy Abraham after a rare mistake by keeper Manuel Neuer, but Bayern's class shone through. Substitute Corentin Tolisso made it 6-1 on aggregate when he volleyed home unmarked inside the six-yard area before Poland forward Lewandowski, who now has 53 goals in 44 appearances in all competitions this season, headed the fourth to finish the match with two goals and two assists.