Yemen’s separatists to give up self-rule, push peace deal 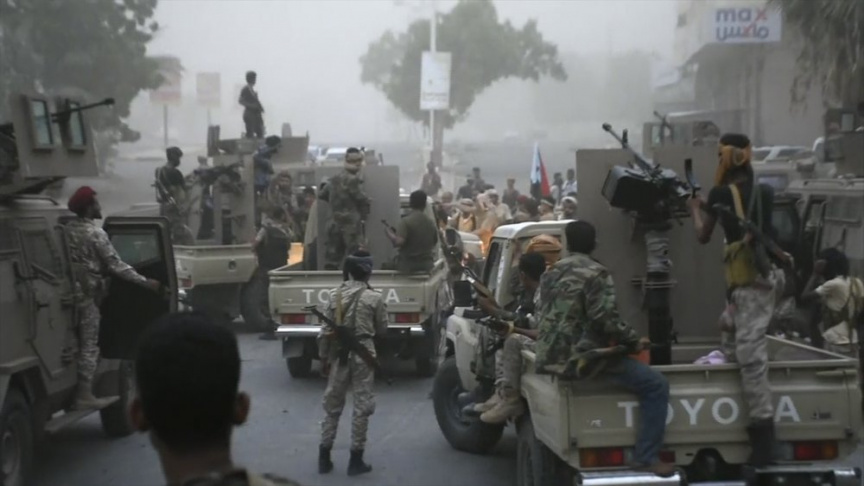 The separatists backed by the United Arab Emirates began withdrawing Sunday from positions they seized from the internationally-recognized government in Aden. Both the southern separatists and the government forces are ostensibly allies in the Saudi-led military coalition that’s been battling the Houthi rebels in northern Yemen since 2015, but the four days of fighting in Aden have exposed a major rift in the alliance. (AP Photo)

CAIRO (AP) — Yemen’s leading separatist group will abandon its aspirations for self-rule to implement a stalled peace deal brokered by Saudi Arabia, it announced early Wednesday in a major step toward closing a dangerous rift between nominal allies in the chaotic proxy war.

Nizar Haitham, a spokesman for the separatists’ Southern Transitional Council, an umbrella group of militias backed by the United Arab Emirates, said the separatists would give up their dreams of autonomy over southern Yemen to pursue the Riyadh agreement.

“We have achieved our goals,” said Haitham, noting that the announcement came under intense pressure from Saudi Arabia and the U.A.E. “We affirm the continuing and deepening of our strategic partnership with the Arab coalition.”

The power-sharing deal, signed in the Saudi capital of Riyadh last fall, sets the stage to end a long-running rivalry between Yemen’s Saudi-backed government and the Emirati-backed southern separatists. The agreement was thrown into disarray earlier this year, when the separatists seized control of the southern port city of Aden, the interim seat of the internationally recognized government, igniting fierce clashes across southern Yemen and the Socotra archipelago.

Saudi Arabia declared early Wednesday that it had proposed a plan to “accelerate” the deal’s implementation, which calls for the creation of a new government within 30 days and the appointment of a new governor and security director for Aden, according to the official Saudi Press Agency.

Throughout the war, the two Sunni Arab states, Saudi Arabia and the U.A.E., have been partners in a military coalition fighting to oust the Iran-allied Shiite Houthi rebels, who seized northern Yemen in 2014.

The standoff between their respective Yemeni allies has frequently erupted into violent turmoil, threatening to shatter the Saudi-led coalition and complicating broader peace efforts to end the five-year conflict, which has killed over 112,000 people and set off the world’s worst humanitarian disaster.

The new Saudi proposal lays out commitments that have been obstacles for months, such as the formation of a government composed of 24 ministers with equal representation for northerners and southerners, including the separatists. It also asks for the withdrawal of rival forces from Aden and the flashpoint southern province of Abyan.

The parties’ commitment to a final deal remains unclear. But the Southern Transitional Council’s breakthrough concession, which prompted outrage on social media from its hard-line supporters, suggests separatists had agreed in principle to the Saudi proposal.

Yemen’s government spokesman Rajih Badi welcomed the Saudi initiative and expressed hope that the separatists would make good on their promise to implement the agreement “out of necessary and urgent national interest.”

The rapprochement comes as Saudi Arabia and the United Arab Emirates, the war’s main sponsors, have sought to inch away from their costly war with the Houthi rebels, which has pushed millions to the brink of famine and settled into a bloody stalemate.

Saudi Arabia announced a unilateral cease-fire earlier this year, which swiftly collapsed but more broadly reflected its growing unease with the war. Last summer, the UAE announced it was ending its role in the conflict, although it continues to wield influence through its proxies, such as the separatist group.

Although the deal seems unlikely to be a step toward lasting peace, even a vague prospect of a settlement was welcome, as Yemen’s devastated health sector grapples with a major coronavirus outbreak and the country faces a drastic shortfall of humanitarian aid that has forced 75% of U.N. programs for the country to end or reduce operations.

On Tuesday, U.N. special envoy to Yemen Martin Griffiths painted a bleak picture of Yemen to the Security Council.

U.N.-mediated peace negotiations between the rebels and government have failed to produce an agreement, he said. Houthi forces are pushing fiercely into the oil-rich province of Marib “with profound humanitarian and economic consequences.” Airstrikes have killed multiple children across the northwest. The economy is collapsing, food prices are surging, and, to make matters worse, an abandoned oil tanker moored off the coast loaded with more than 1 million barrels of crude oil is at risk of rupture or exploding.

“I do not wish to sugarcoat things,” said Griffiths, warning that the country could plunge at any moment into “a new phase of prolonged escalation, uncontrolled spread of COVID-19, and economic decline.”

US resumes aid to Yemen’s north as famine threatens

Biden ending US support for offensive in Yemen

Virus spreads in Yemen with health system in shambles