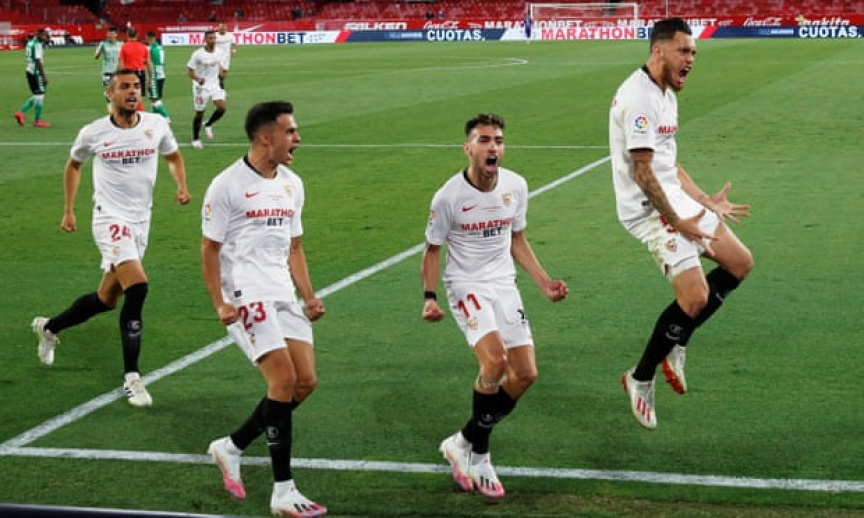 Sevilla beat Real Betis in the Seville derby as La Liga returned after a three-month gap - with some teething problems off the pitch.

Groups of fans ignored guidance as they gathered outside the Ramon Sanchez-Pizjuan Stadium before the game, and some of the TV presentations left plenty to be desired.

But in Lucas Ocampos the hosts had the key man to win the first match played in Spain since the coronavirus pandemic halted proceedings on 10 March.

La Liga is the second of Europe's big five leagues to resume, with the Premier League following suit next week.

After a minute's silence in memory of those who have died during the pandemic, La Liga returned with some new additions.

As previously heard in Germany, there was artificial crowd noise. But unlike in Germany, the mix was way too low and almost inaudible for much of the game.

The vast, empty stands were painted in 'virtual support' in what was sold beforehand as images of fans wearing club colors.

The actual effect was extremely low key though, looking more like a collage of colored dots which were only visible on the one wide camera shot, with the 'crowd' disappearing whenever the director changed angle, and sometimes hovering in mid-air when a replay appeared.

\Ocampos was the game's key player throughout, rattling the crossbar from a narrow angle in the first half before breaking the deadlock from the penalty spot.

He then conjured an ingenious backheeled flick from a corner to find Fernando for the game-sealing second goal, Sevilla celebrating the three points just after midnight local time.

Leaders Barcelona are in action for the first time on Saturday, while Real Madrid play on Sunday.

Barça win after Araújo taken off the field in ambulance

No honor guard for Real Madrid as Atlético beats champ