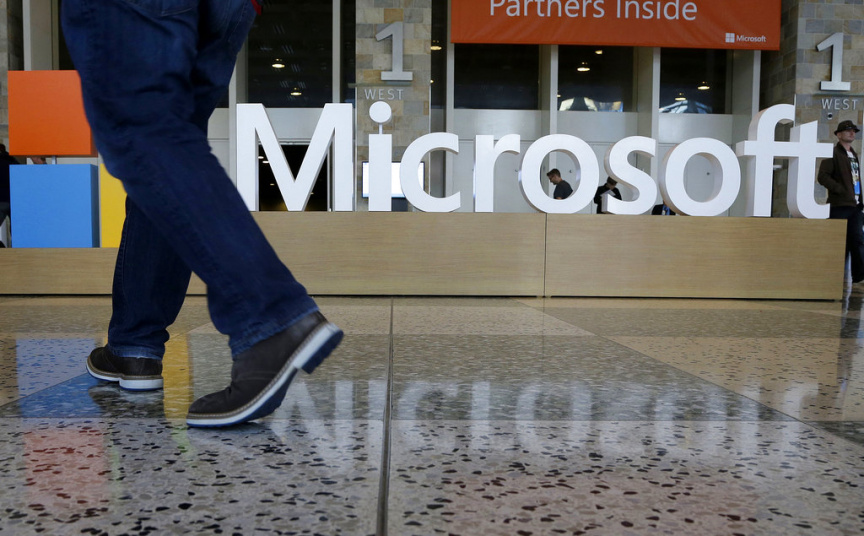 FILE - In this April 28, 2015, file photo, a man walks past a Microsoft sign set up for the Microsoft BUILD conference at Moscone Center in San Francisco. Microsoft says it’s requiring its U.S. suppliers to offer their employees at least 12 weeks paid leave to care for a new child. The company announced the new parental leave policy Thursday, Aug. 30, 2018. (AP Photo/Jeff Chiu, File)

Microsoft has become the third big tech company this week to say it won’t sell its facial recognition software to police, following similar moves by Amazon and IBM.

Microsoft’s president and chief counsel, Brad Smith, announced the decision and called on Congress to regulate the technology during a Washington Post video event on Thursday.

“We’ve decided we will not sell facial recognition technology to police departments in the United States until we have a national law in place, grounded in human rights, that will govern this technology,” Smith said.

The trio of tech giants is stepping back from law-enforcement use of systems that have faced criticism for incorrectly identifying people with darker skin. Ongoing protests following the death of George Floyd have focused attention on racial injustice in the U.S. and how police use technology to track people.

But while all three companies are known for their work in developing artificial intelligence, including face recognition software, none is a major player in selling such technology to police. Smith said Thursday that Microsoft currently doesn’t sell its face recognition software to any U.S. police departments. He didn’t say if that includes federal law enforcement agencies or police forces outside the U.S.

Several other companies that are less well known to dominate the market for government facial recognition contracts in the U.S., including Tokyo-based NEC and the European companies Idemia and Gemalto.

Microsoft, Amazon, and IBM are calling on Congress to set national rules over how police use facial recognition — something that’s now being considered as part of a police reform package sparked by the protests following Floyd’s death.

“If all of the responsible companies in the country cede this market to those that are not prepared to take a stand, we won’t necessarily serve the national interest or the lives of the black and African American people of this nation well,” Smith said. “We need Congress to act, not just tech companies alone.”

Microsoft has spent two years warning of the potential dangers of face-scanning technology being abused to enable oppressive mass surveillance, but the company has opposed outright bans on government use of the technology passed in San Francisco and other cities. That’s led to criticism from groups such as the American Civil Liberties Union, which says Microsoft is lobbying for weak regulations that could end up legitimizing and expanding police use of facial recognition.

“Congress and legislatures nationwide must swiftly stop law enforcement use of face recognition, and companies like Microsoft should work with the civil rights community — not against it — to make that happen,” said Matt Cagle, an attorney with the ACLU of Northern California, in a statement Thursday.

Microsoft in advanced talks to buy TikTok’s US business

Bill Gates stepping down from Microsoft board

Microsoft staff protest use of HoloLens for war

Amazon: Email to employees banning TikTok was a mistake