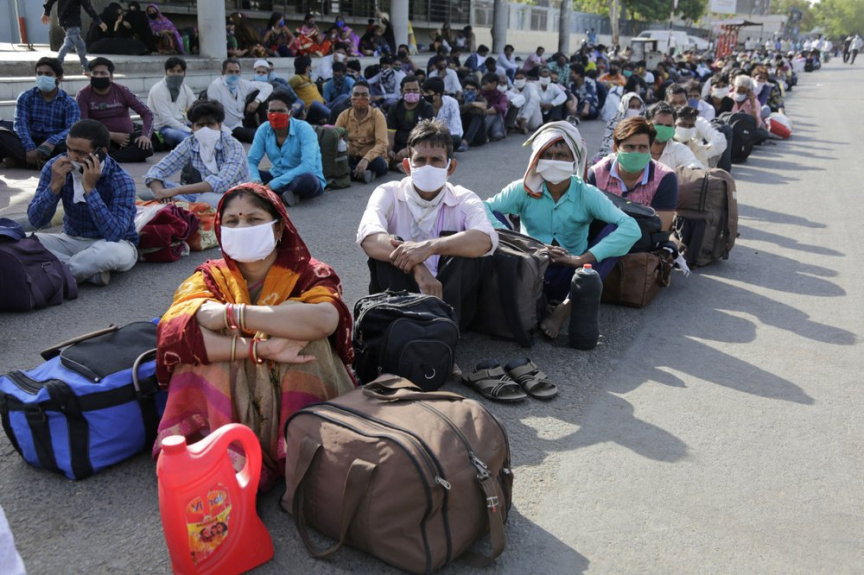 Migrant workers from other states trying to return to their homes wait for transportation to a train station in Ahmedabad, India, Sunday, May 17, 2020. (AP Photo/Ajit Solanki)

After surpassing China on Saturday, India now has the most confirmed virus cases in Asia, with nearly 91,000.

New Delhi, Mumbai, Chennai and some other key regions are still battling to control the rising curve of coronavirus infections. But the Home Ministry said low-risk areas will be allowed to restore economic activity.

The Health Ministry on Sunday reported a record jump of nearly 5,000 cases in the past 24 hours, raising the number of confirmed cases in India to 90,927, including 2,872 deaths.

India had fewer than 500 confirmed cases and nine deaths when the lockdown was first imposed on March 25.

On May 4, the government announced an easing of restrictions, allowing the reopening of neighborhood shops nationwide, and the resumption of manufacturing and farming in rural areas. It also resumed running a limited number of trains, mainly to carry stranded migrant workers.

— CHINA REOPENS MORE SCHOOLS: China reported five new cases of the coronavirus on Sunday, as the commercial hub of Shanghai announced the restart of some classes and airlines revive domestic flights. Of the new cases, two were imported and three came from the northeastern province of Jilin, which has seen a small spike in infections of unknown origin. In Shanghai, students retain the option of continuing to take classes online rather than facing virus testing and social distancing measures at schools. As in Beijing and other cities, Shanghai has already restarted classes for middle and high school students preparing for exams. Meanwhile, the number of domestic flights in China has returned to 60% of pre-outbreak levels, exceeding 10,000 per day for the first time since Feb. 1, the country’s civil aviation regulator reported.

— THAILAND MALLS REOPEN: Thais streamed into shopping malls on Sunday, as the country eased one of the restrictions imposed to fight the coronavirus. The government allowed malls to reopen after the number of new virus cases in Thailand dwindled to single digits for all but one day over more than two weeks. Malls had been closed since March. Measures have been instituted to reduce the danger that the malls will become new infection hotspots. Thermal scanners check temperatures, each shopper must pass through a disinfectant mist at every entrance and everyone must wear a mask throughout their stay. Shoppers also must use their smartphones to register electronically when entering and leaving a mall, and when entering and leaving individual stores.

— NEPAL EXTENDS LOCKDOWN: Nepal has extended its nationwide lockdown to June 2. Information Minister Yuba Raj Khatiwada said the decision was made at a Cabinet meeting on Sunday. The lockdown was first imposed on March 24 and has been extended several times. Nepal has confirmed 295 cases and announced its first death from the virus on Saturday. All flights and ground transport have been halted and people are prohibited from leaving their houses. All schools and most markets are closed.

— INDIA DOCTOR ASSAULTED BY POLICE: A doctors’ group said police in southern India assaulted a doctor for previously protesting a lack of personal protective equipment, the latest case of hostility toward Indian health workers amid the coronavirus crisis. Dr. Srinivas Rajkumar, general secretary of the Resident Doctors Association, said the attack occurred Saturday in Vishakhapatnam, a city in the state of Andhra Pradesh. Videos of a bare-chested Dr. K. Sudhakar being kicked by a police officer were posted on social media, leading to the officer’s suspension. Sudhakar, an anaesthetist at a government hospital, was suspended last month for alleging that the government was not providing enough protective equipment to doctors, the Hindustan Times newspaper reported Sunday. City Police Commissioner R.K. Meena said police found a drunken Sudhakar causing a disturbance on a highway. Sudhakar could not immediately be reached for comment. There have been several attacks on health workers in India since the coronavirus crisis began.

— 13 NEW CASES IN SOUTH KOREA: South Korea reported 13 new cases of the coronavirus, raising hopes that a new outbreak linked to nightclubs in Seoul may be ending. The additional figures bring the national tally to 11,050 cases, including 262 deaths. The agency says 17,660 are still being tested for the virus. After weeks of slowdown, South Korea’s daily jump marked an average of about 30 cases for several days, mostly associated with nightclubs in Seoul’s Itaewon entertainment district. The daily increase dropped to 19 on Saturday.

— OPERA FOR QUARANTINED AUSSIES: Opera singer Jane Ede will perform Monday for the first time since the coronavirus pandemic forced the cancellation of live shows, but in an unusual location. Ede, Opera Australia’s principal soprano, will join several other musicians for about 450 guests who have spent two weeks in government-ordered hotel quarantine after returning from overseas. The audience, on their last night in quarantine in the downtown Sydney hotel, will be able to watch the courtyard performance from their balconies, or on their in-room TVs or devices. For the soprano, who has starred in productions of The Marriage of Figaro, La Boheme, Don Giovanni and Falstaff among many others, it will be her first live performance since March. “It will be lovely just to have a really good sing again,” Ede said.

— SRI LANKA REIMPOSES WEEKEND CURFEW: Sri Lanka reimposed a 24-hour curfew this weekend even though the government has begun easing a two-month lockdown. Private businesses and government offices reopened last week. However, at midnight Saturday, authorities again slapped a 24-hour curfew in an apparent move to restrict people’s movements during the weekend. The curfew is expected to be relaxed on Monday morning. Health authorities say COVID-19 is under control in the Indian Ocean island nation. A total of 960 cases have been confirmed, including nine deaths.