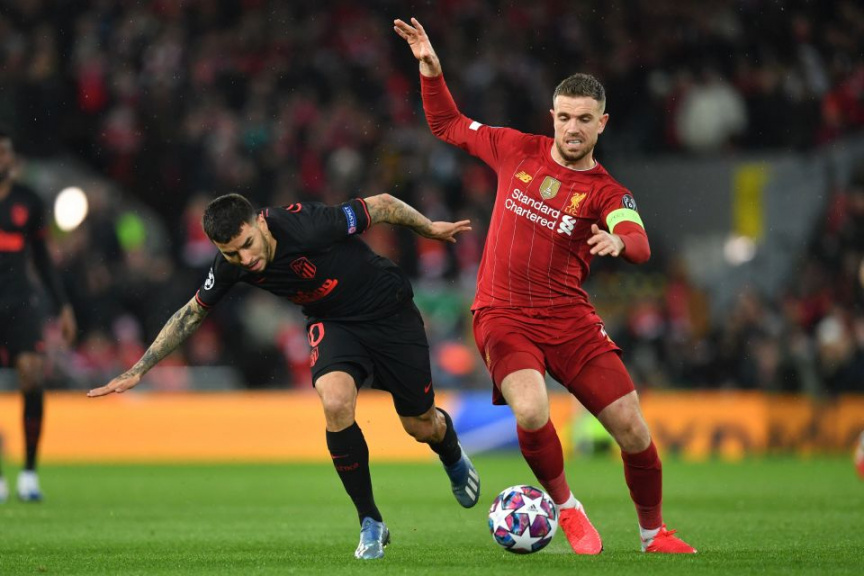 Liverpool captain Jordan Henderson is seen fighting for the ball against an Atletico Madrid player. The Reds crashed out of the Champions League after their 2-3 loss against Spanish side on March 12, 2020. (Photo/TalkSport/Getty Images)

Last season's champions Liverpool were knocked out of the Champions League after they lost both legs of their last-16 tie against Atletico Madrid.

Liverpool went into extra time in a balanced game which later turned into a blunder by an error of goalkeeper Adrian.

Klopp's side were hoping that they had overturned Atletico's 1-0 advantage from the first leg when Roberto Firmino's goal at the start of the extra 30 minutes gave them the lead in the tie.

Georginio Wijnaldum's first-half header came as a result of Liverpool laying siege to the Atletico goal for much of the first 90 minutes. Adrian, on for the injured Alisson, paid the price for a dreadful clearance as substitute Marcos Llorente pounced with a low finish to secure Atletico's crucial away goal.

Llorente struck again with another composed finish in the 105th minute. Former Chelsea striker Alvaro Morata then added a third in the dying seconds to send Atletico through to the last eight.

Liverpool who came into the match, seeking to win the trophy for the seventh time, lost the tie 3-2 with an aggregate result of 2-4.

Paris St-Germain also overturned a 2-1 deficit against Borussia Dortmund inside an empty Parc des Princes to reach the last eight.

Concerns over the Covid-19 disease meant that fans were barred, but many gathered outside the stadium and celebrated when Neymar headed PSG into the lead.

Juan Bernat then made it 3-2 on aggregate when he turned in Pablo Sarabia's ball.

Dortmund's Emre Can saw a red card later on after two bookings in quick succession.

PSG won the match 2-0, ensuring an aggregate victory of 3-2 over the German side.

PSG's players celebrated wildly at full-time before greeting the hundreds of supporters who remained outside the Parc des Princes.