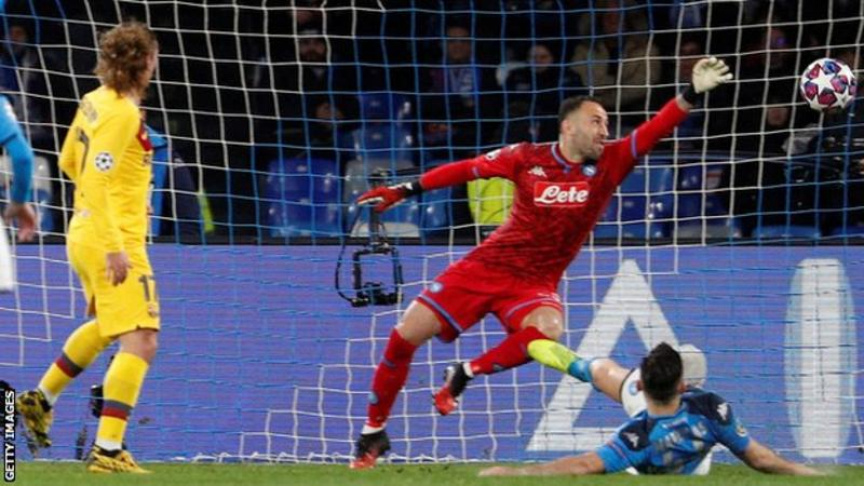 The Champions League clash between Barcelona and Napoli played out to a draw last night.

Barcelona came from behind to draw against Napoli in the first leg of the last-16 tie in Italy, getting a valuable away goal. Dries Mertens had earlier curled in from 18 yards in the first half.

The Italian club had chances in the second half but visiting German goalkeeper Marc-Andre ter Stegen made two brilliant saves, to deny both Insigne and former Real Madrid player Callejon.

Barcelona's Chilean midfielder Arturo Vidal was sent off late in the match for fouling Fabian Ruiz. The midfielder pushed his head into Ruiz's face before being shown two yellow cards in quick succession.

The return match takes place at Camp Nou on March 18, 2020. The La Liga leaders will be without suspended midfielder Sergio Busquets who picked up his third booking of this season's tournament.

Barcelona also had an injury worry as center-back Gerard Pique hobbled off in added time at the end of the match with an ankle injury.

The situation with Napoli forward Mertens, who also limped off and had to be replaced shortly afterward will also be a worrying concern for coach Gattuso.

Gnabry the starman as Bayern eases past Chelsea!

The last-16 clash between Bayern Munich and Chelsea ended 3-0 in favor of Bayern with former Arsenal forward Serge Gnabry taking the match by the scruff.

Gnabry who has been in scintillating form this season for Bayern, scored two clinical goals in the match to seemingly end Chelsea's Champions League campaign. The English club was brutally outclassed by Bayern Munich in the match at Stamford Bridge.

Polish forward Lewandowski then killed the match with a 76th-minute strike after being fed by the brilliant teenager Alphonso Davies.

Chelsea's misery was made even worse when defender Marcos Alonso was sent off late on after a clash with Lewandowski and Jorginho was also ruled out of the second leg when he received a yellow card for dissent.

City comes back to win against Real, Lyon stun Juventus