Next for Weinstein: Sentencing, appeal and another rape case 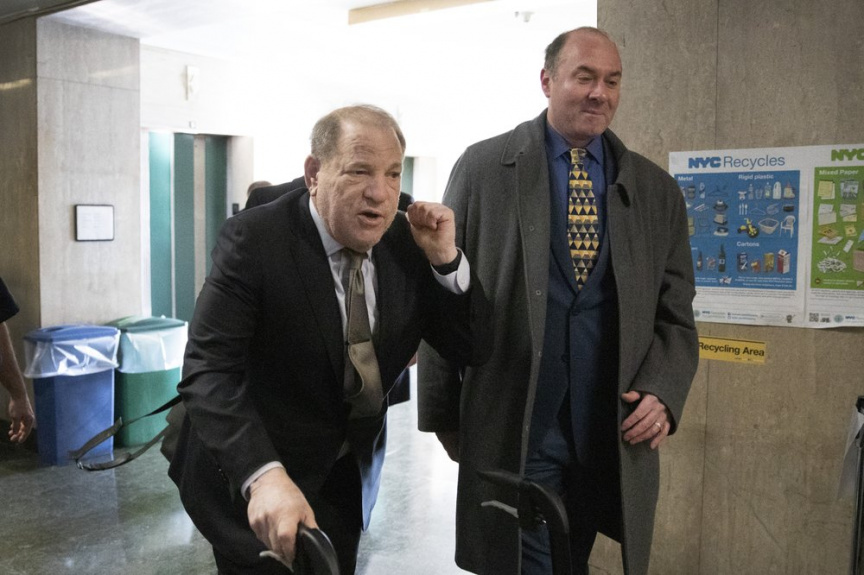 Harvey Weinstein arrives at court for his trial on charges of rape and sexual assault, Thursday, Jan. 30, 2020 in New York. (AP Photo/Mark Lennihan)

NEW YORK (AP) — A day after a jury branded Harvey Weinstein a convicted rapist, the former film producer remained at a New York City hospital on Tuesday, his new life as an inmate interrupted by concerns about high blood pressure and heart palpitations.

Lawyers for the 67-year-old Weinstein said he was buoyed by plans to appeal Monday’s sexual assault and rape conviction, and that the detour to Bellevue Hospital on the way to the city’s notorious Rikers Island prison complex was precautionary.

Elsewhere, it was Weinstein’s accusers who were feeling energized.

They’ve continued to herald the verdict in the landmark #MeToo case as a sign that women’s voices are being heard, with some even saying they’re ready to testify in his looming California criminal case, if asked.

WILL WEINSTEIN GO TO JAIL ONCE HE LEAVES THE HOSPITAL?

Aidala said Weinstein wasn’t handcuffed when they greeted each other Tuesday in a large hospital room as jail officers stood guard outside. He said that Weinstein was looking forward to visitors and it wasn’t clear how long he would be there.

If Weinstein gets discharged from Bellevue, it’s likely he’ll end up at a protective unit at the city’s Rikers Island jail facility. It’ll be a short stay because he’ll be moved to a state prison after sentencing.

While it’s up to the city’s corrections department to decide where inmates are housed, Judge James Burke said he’d ask that Weinstein be placed in the jail’s North Infirmary Command, where he’d have “something tantamount to protective custody.”

Martin Horn, a former city corrections commissioner, said that despite its name, the infirmary is more like a regular jail than a hospital unit.

Built in 1932 as the original Rikers Island Hospital, the infirmary now has smaller, 10-cell blocks that are used for protective units for inmates who might be targets in general population, such as sex offenders and former law enforcement officers.

Horn said the city’s jails have specialized units for the disabled but inmates with serious medical needs are often sent to the hospital ward at Bellevue.

In lobbying to keep Weinstein out of jail after the verdict, his lawyer, Donna Rotunno, told Burke that he has back injuries stemming from a car crash last summer and a condition that requires shots in his eyes, so he does not go blind.

After visiting with Weinstein Tuesday, Aidala told reporters: “He’s not the picture of health by any stretch of the imagination.”

WHEN WILL WEINSTEIN BE SENTENCED AND WHERE WILL HE BE IMPRISONED?

Weinstein is due to be sentenced on March 11. He was convicted on two counts: criminal sex act for forcibly performing oral sex on a woman in 2006 and third-degree rape for a 2013 attack on another woman. Together, the charges carry a maximum penalty of 29 years in prison.

At Weinstein’s sentencing hearing, his accusers will again get a chance to confront him in court and the former producer will be afforded an opportunity to speak after declining to testify at trial.

Once Weinstein is sentenced, he’ll be transferred from the city’s jail system to the state prison system. There, he will undergo a thorough evaluation, including a comprehensive medical review, to determine which facility is best to imprison him.

“They’re going to make sure that nothing happens to him while he’s in their custody. Not because he’s important, but just from a public relations point of view it would be awfully embarrassing,” said Horn, who now teaches at John Jay College of Criminal Justice.

WHAT ISSUES COULD WEINSTEIN’S LAWYERS RAISE ON APPEAL?

Weinstein’s lawyers were upset with the judge’s handling of the case, from his inclusion of a juror who’d written a novel involving predatory older men to his rulings on evidence, witnesses and objections.

They could challenge Burke’s decision not to delay the trial when authorities in Los Angeles announced new charges against Weinstein just as jury selection was about to get underway.

The defense team was also upset that some evidence was turned over to them at the last minute or after witnesses had already testified. In one instance, an accuser said she found the dress she was wearing the night of an alleged encounter with Weinstein just days before she was to take the witness stand — too late, the defense said, for it to be tested for DNA.

Aidala said Tuesday that Weinstein was “somewhat flabbergasted by the verdict” but remained “cautiously optimistic” he could prevail on appeal.

WHAT ARE THE ALLEGATIONS IN THE CALIFORNIA CASE?

Weinstein faces charges that he raped a woman at a Los Angeles hotel in 2013, then sexually assaulted a different woman in a Beverly Hills hotel the next night.

Eleven other women alleging sexual misconduct by Weinstein told reporters Thursday that they hope to testify against him at that trial.

Weinstein could get up to 28 years in prison on the charges in the California case.

Additional sexual assault cases are under investigation by police in the Los Angeles area.

“This is only the beginning. We will continue to fight,” said Sarah Ann Masse, another of the women who spoke Tuesday as part a group calling itself the “Silence Breakers.” She says Weinstein once sexually harassed her in his underwear during a job interview.

HOW ARE PEOPLE REACTING?

“He was a person I didn’t like,” Trump told reporters.

Trump himself stands accused of sexual misconduct, including a rape allegation, by more than a dozen women when he was a private citizen. He has denied the allegations.

Mimi Haleyi, the former production assistant who accused Weinstein of forcing oral sex on her in 2006, called the verdict “a huge relief.”

“I just think that we’re being educated about the reality of sexual assault and sexual assault victims,” Haleyi said on “CBS This Morning.” “It’s not always just a stranger. It’s very often somebody that the person knows, and with that comes an entire other layer of processing.”

The Associated Press does not typically identify people who say they are victims of sex crimes unless they grant permission, as Geiss, Masse and Haleyi have done.

Weinstein pleads not guilty to sexual assaults in LA

Weinstein gets 23 years in sentence hailed by accusers

Weinstein lawyer: Prosecutors have a ‘tale,’ not a case

Weinstein says private eyes hired ‘for days like this'

Gunman kills 5 in US before taking own life