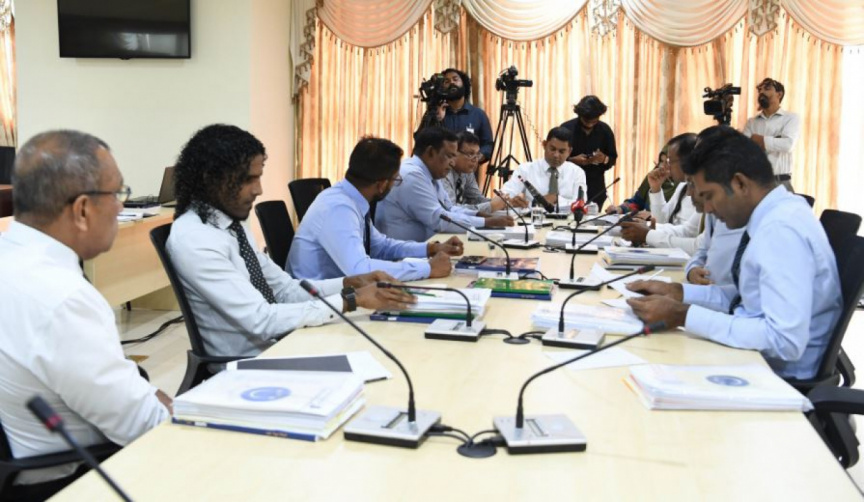 Members of the Parliament's Public Accounts Committee convene for a session on February 17, 2020. (Photo/People's Majlis)

Parliament’s Public Accounts Committee, on Tuesday, voted in support of the decision by Finance Ministry regarding the allocation of space from the new seaplane terminal in Velana International Airport.

The motion to support the recommendations was raised by Maradhoo MP Ibrahim Shareef, and seconded by Hanimaadhoo MP Abdul Gafoor Moosa during a session of the committee held in the afternoon.

The motion passed with the majority vote of seven committee members, while Dhaandhoo MP Abdulla Yauqoob and Felidhoo MP Ibrahim Fazul Rasheed chose to abstain from the vote.

The new seaplane terminal, part of a larger airport development project, was financed with a USD 40 million loan.

Following a dispute regarding the allocation of space from the new terminal, the Finance Ministry, on February 5, intervened with the recommendation that Maldives Airports Company Limited (MACL) allocate the Trans Maldivian Airways (TMA) with the same size of space they presently enjoy at the existing seaplane terminal, and at the same rate.

The committee, on Tuesday, recommended that other seaplane operators should be allocated space from the new terminal at the same rate as TMA, and that the rest of the space should be issued through a tendering process for a two-year duration.

They recommended that the two years should be used by MACL to prepare to take over the management of operations at the new terminal and to train staff.