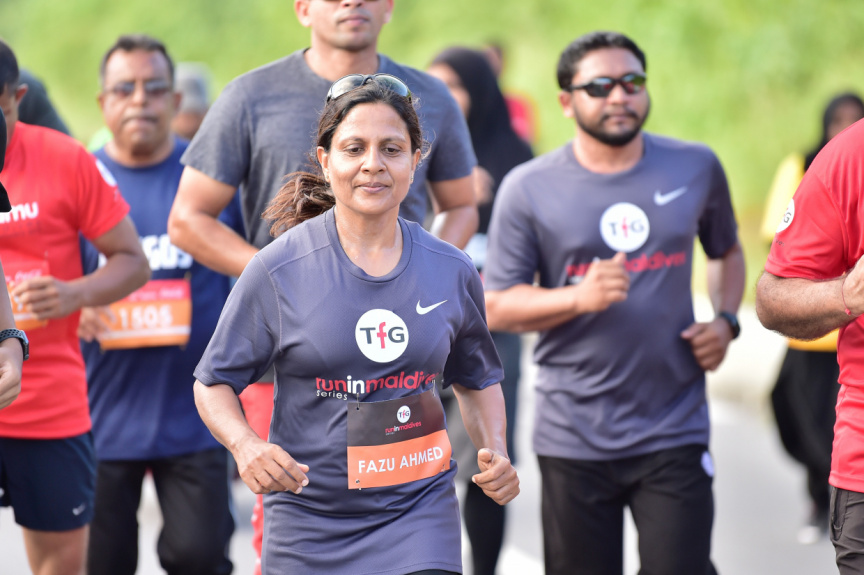 First Lady Fazna became the fastest first lady to complete a marathon in the world when she completed a marathon in L. Gan in five hours on January 25, 2020. (Photo/President's Office)

Running a 42-kilometer marathon was previously seen as a difficult task for many. However, lately, the awareness of running and its health benefits for an extracurricular activity among people has seen many participate in marathons and even begin running as an exercise. The number of runners in the country increased and has finally broken the myth that running a marathon is not such a difficult task.

The motivation for running has seen the Maldives break a special world record today. Today, Maldivian First lady Fazna Ahmed became the fastest first lady to complete a marathon by crossing the finish line in five hours and 39 minutes.

The record was previously held by former Kenyan First Lady Margeret Kenyatta who completed a marathon in seven hours and four minutes. It is no easy task to catch up to Kenyans in running, and this is one of the reasons why the record by First Lady Fazna is so special. She completed the marathon, two hours and 35 minutes ahead of the former First Lady of Kenya.

Madam First Lady’s success in the “Laamu Marathon” is being celebrated by many on social media. She was greeted at the finish line by her daughter Sarah Aisha Ibrahim, who also awarded her the medal of completion.

First Lady Fazna’s success was also congratulated by Sports Minister Ahmed Mahloof and Secretary-General of the Olympic Committee Ahmed Marzooq (Marey). Marey tweeted with a video of First Lady Fazna’s finish that “beating a Kenyan in any category of long-distance running was a massive win”.

Congratulations Madam @thadhs. You inspire us all to go that extra-mile and strive to be the best we can be! Wish you many more miles of happiness and prosperity! https://t.co/BO7BQnkW35

Minister Mahloof also tweeted that he remembered the preparation s the First Lady made for this event during the Indian Ocean Island Games. President Ibrahim Mohamed Solih and First Lady also took part in the five-kilometer run organized by TfG in L. Gan last year.