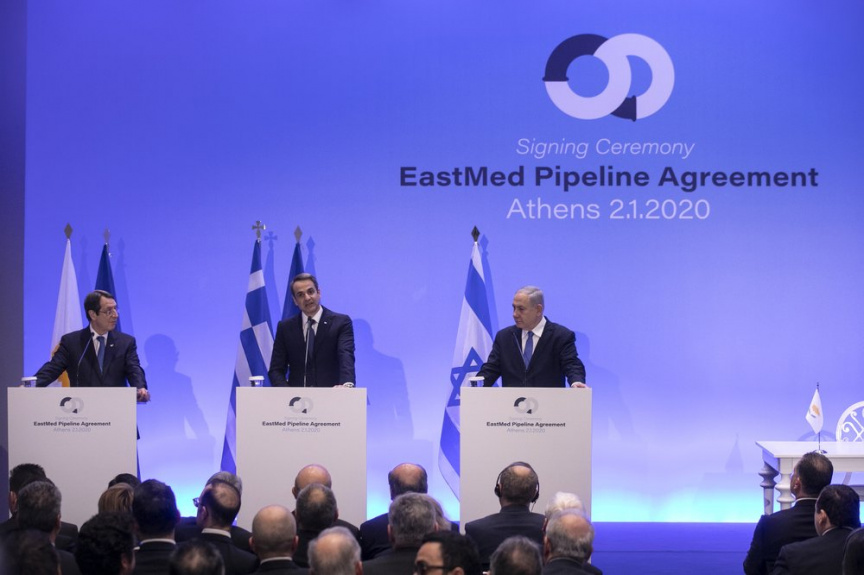 ATHENS, Greece (AP) — Greece, Israel and Cyprus signed a deal Thursday to build an undersea pipeline to carry gas from new offshore deposits in the southeastern Mediterranean to continental Europe.

The 1,900-kilometer (1,300-mile) EastMed pipeline is intended to provide an alternative gas source for energy-hungry Europe, which is largely dependent on supplies from Russia and the Caucasus region

The pipeline would run from Israel’s Levantine Basin offshore gas reserves to Cyprus, the Greek island of Crete and the Greek mainland. An overland pipeline to northwestern Greece and another planned undersea pipeline would carry the gas to Italy.

The project could also accommodate future gas finds in waters off Cyprus and Greece, where exploration is under way.

The project, with a rough budget of $6 billion, is expected to satisfy about 10% of the European Union’s natural gas needs. But it is fraught with political and logistical complexities.

The race to claim offshore energy deposits in the southern Mediterranean has created new tensions between Greece and Cyprus, on one side, and historic rival Turkey.

Ankara has raised the stakes with recent moves to explore waters controlled by the two EU member countries. Cyprus and Greece are particularly disturbed because Turkey sent warship-escorted drill ships into waters where Cyprus has exclusive economic rights.

Cyprus’ Anastasiades said the pipeline affirms that Greece and Cyprus have sovereign rights in waters assigned to them under international law.

“This cooperation that we have developed ... isn’t directed against any third country,” he said. “On the contrary, whichever country wishes is welcome to join, on the understanding of course that it adopts the basic principles of international law and fully respects the sovereign rights and the territorial integrity of independent states.”

Alluding to Turkey’s stance, Anastasiades said cooperation is the only approach in an unstable region instead of embarking on a course of “self-isolation.”

Netanyahu said Israel is set to become a “powerhouse in terms of energy” with its offshore gas reserves. He added that the three countries have established ”an alliance of great importance” that will bolster regional stability.

Israeli Energy Minister Yuval Steinitz has said the EastMed pipeline would take up to seven years to build and that its advantages include being less vulnerable to sabotage and not crossing many national borders to reach markets.

Cyprus is divided into a Greek Cypriot south, where the island nation’s internationally recognized government is located, and a breakaway Turkish Cypriot north backed by Turkey. The split followed a 1974 Turkish invasion after an aborted coup aiming to bring Cyprus under Greek rule.

Turkey doesn’t recognize Cyprus as a state and claims much of Cyprus’ exclusive economic zone as falling within its own continental shelf.

Turkey is also laying claim to large tracts under Greek control in the Aegean Sea and off Crete. Turkish President Recep Tayyip Erdogan has said no project can proceed without his country’s consent following a maritime border agreement that Ankara signed with the Libya’s Tripoli-based government.

Rockets fired after day of mourning for Iran General