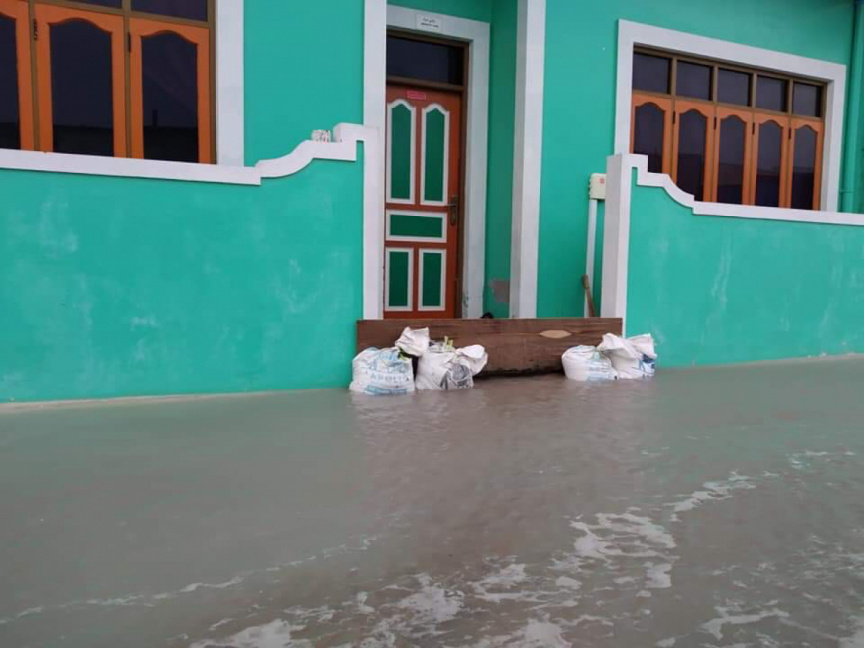 Residents of N. Holhudhoo, on Saturday, reported damages to several homes due to tidal flooding.

A resident whose home is situated in Northern Holhudhoo reported to Sun that flood water had reached approximately 200-feet inland, resulting in flood water up to one-foot inside the homes closest to the Northern coast of the island.

“It has been flooding since dawn today,” he said.

According to the resident, the homes in Northern Holhudhoo are affected by tidal flooding during Iruvai Monsoon (North East Monsoon) each year, resulting in damage to furniture and household appliances.

“Household appliances get damaged due to the seawater. We have to replace household appliances two or three times (a year). We bathe with freshwater six months a year, and have to bathe using seawater the other six months. The freshwater in homes are contaminated by seawater during Iruvai Monsoon. We need to replace the roofs two times a year. We are constantly repairing damages due to flooding,” he said.

He said that homes in Northern Holhudhoo had been consistently affected by tidal flooding for years, and that efforts to bring the plight of the residents to the attention of State authorities had failed.

Holhudhoo Council’s vice president Mohamed Afrah said that tidal flooding had consistently affected Northern Holhudhoo every Iruvai Monsoon, but that the seawall built in the area in 2015 had helped minimize the effect.

Afrah said that the Council had yet to receive report of flood water seeping inside any home this Saturday.