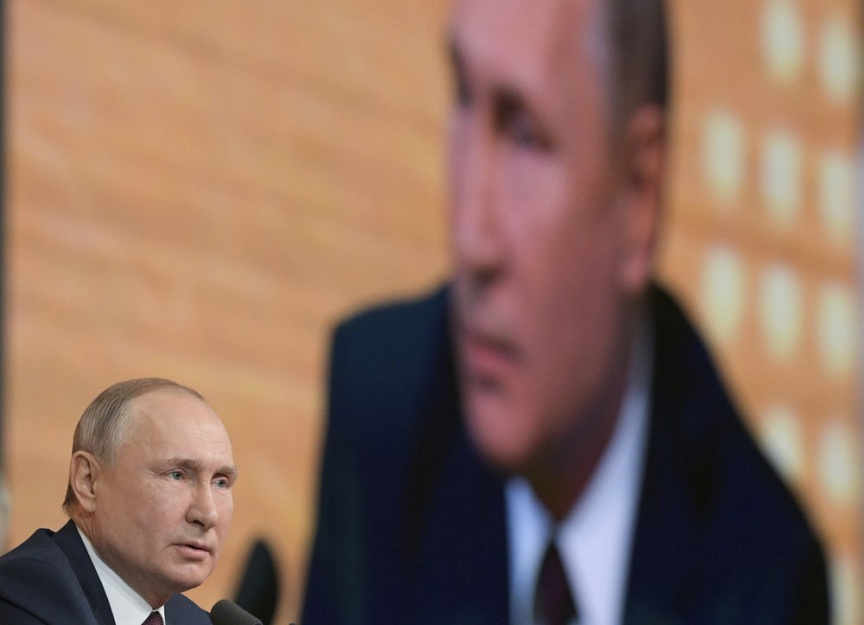 MOSCOW (AP) — Russian President Vladimir Putin said Thursday that U.S. President Donald Trump was impeached for “far-fetched” reasons, calling the move by Democrats a continuation of their fight against the Republican leader.

“It’s simply a continuation of internal political struggle,” Putin said at his end-of-year news conference in Moscow. “The party that lost the (2016) election, the Democratic Party, is trying to achieve results by other means.”

He likened Trump’s impeachment to the earlier U.S. probe into collusion with Russia, which Putin played down as groundless. Former special counsel Robert Mueller concluded earlier this year that the Russian government interfered in the 2016 U.S. presidential election in a “sweeping and systematic fashion.”

“Now they invented some sort of pressure on Ukraine,” Putin said, referring to the investigation of Trump’s trying to enlist the president of that country to announce investigations of his political rival as he withheld U.S. aid to Kyiv.

Trump on Wednesday became only the third American president to be impeached. The historic vote in the House of Representatives split along party lines over a charge of abusing his power. The House also approved a second article that he obstructed Congress in its investigation.

Noting the Republicans have a majority in the Senate, where a trial of Trump will be conducted, Putin said “they will be unlikely to remove a representative of their own party from office on what seems to me absolutely far-fetched reasons.”

Turning to the New START nuclear arms reduction treaty with the U.S. that expires in 2021, Putin said that Russia is ready to extend it “even tomorrow,” warning that the demise of the last U.S.-Russian arms control deal will remove the final barrier stemming an arms race.

Putin spoke on a variety of issues during the marathon news conference that lasted for more than four hours and was dominated by local issues, such as Russia’s ailing health care system and federal subsidies for the regions.

The 67-year-old Russian president, who marks two decades in power later this month, remained coy about his political future. He wouldn’t answer if he could potentially extend his rule by shifting into a new governing position to become the head of a union between Russia and neighboring Belarus.

Putin served two four-year terms as president in 2000-2008, then moved into the premier’s position to observe a constitutional limit of two consecutive terms. He was re-elected in 2012 and 2018, and his current six-year terms runs through 2024.

He suggested modifying the law to limit a president to two terms altogether, which some observers said could signal his intention to stay at the helm by shifting into another position and reduce the power of presidency.

The Russian president left the door open to amending the Russian Constitution to change the distribution of powers of the president, the Cabinet and parliament, but noted that revisions must be made carefully after a broad pubic discussion.

Asked about costly business projects reportedly run by his two daughters, whom the Kremlin has carefully kept out of the public eye, Putin praised the initiatives but stopped short of confirming any details about them.

He emphasized that Russia has abided by the Paris agreement intended to slow down global warming. At the same time, he noted that the U.S. and China, which are responsible for a large share of greenhouse gas emissions, aren’t part of the deal.

Putin also hailed the economic achievements of his rule, pointing that Russia has become the world’s largest grain exporter, surpassing the U.S. and Canada — a dramatic change compared to the Soviet Union that heavily depended on grain imports.

The Russian economy had suffered a double blow of a drop in global oil prices and Western sanctions that followed Moscow’s 2014 annexation of Crimea. It has seen a slow recovery since 2017 after a two-year stagnation.

Russia’s ties with the West have remained at post-Cold War lows, but Putin argued that Russia has recovered and become more resilient to shocks from Western penalties and fluctuations in global energy prices.

He deflected Western criticism, saying that he sees his mission in protecting Russia’s national interests and pays little attention to negative diatribes.

Noting the continuing strain in relations with Britain, Putin praised Prime Minister Boris Johnson for winning a strong parliament majority in his general election and held the door open for improving ties.

“He came out the winner because he had felt the British society’s sentiments more acutely,” he said.

Putin voiced hope for further moves to settle the conflict in eastern Ukraine following his talks in Paris on Dec. 9 with the leaders of Ukraine, France and Germany.

He said that the 2015 peace agreement signed in Minsk and brokered by France and Germany must be observed, rejecting Ukrainian President Volodymyr Zelenskiy’s push for revising it.

“If we start revising the Minsk agreement, it will lead to deadlock,” Putin said.

The fighting in eastern Ukraine, which flared up in 2014 after Russia’s annexation of Crimea, has killed more than 14,000.

Putin, who once lamented the 1991 breakup of the Soviet Union as the greatest geopolitical catastrophe of the 20th century, had some harsh words to say about Soviet founder Vladimir Lenin.

He lambasted Lenin’s policies on ethnic issues, saying that his idea to grant broad autonomy to ethnic-based Soviet republics, including their right to secede, paved way for the Soviet breakup once the Communist Party’s hold on power started to loosen.

At the same time, Putin rejected the push for taking Lenin’s embalmed body out of the Red Square tomb and burying it, saying that it would offend older people who still see the Soviet founder as a powerful symbol.

He noted that the Soviet demise spawned expectations of a “unipolar world” in which the U.S. dictates terms to others, adding that such “illusions” quickly collapsed. Putin said that China has come to challenge the U.S. as the global economic powerhouse and hailed increasingly close ties between Moscow and Beijing.

Putin dismissed reports of an emerging military alliance between Russia and China, but noted that Moscow was helping Beijing to develop an early warning system to spot ballistic missile launches. Only Russia and the U.S. currently have the system that includes ground-based radar and satellites.

“It will allow our strategic partner to boost its defense capability,” he said.

Putin rallies behind troops as lethal fire rains down