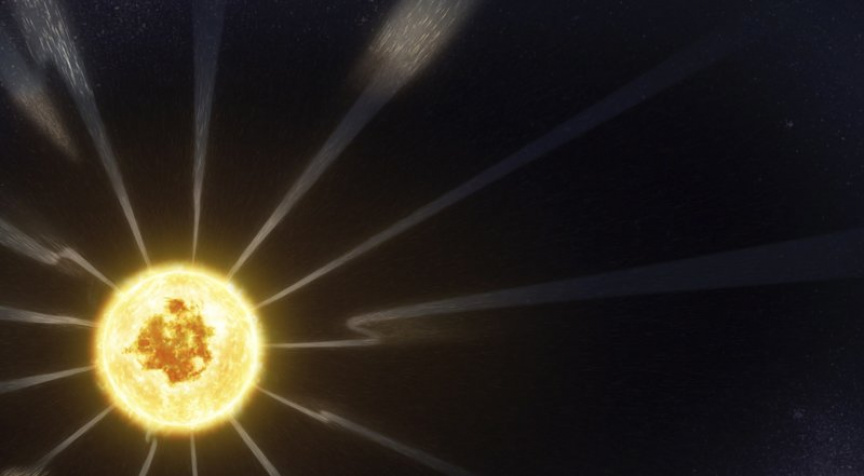 This image taken from video animation provided by NASA, shows flips in the direction of the magnetic field embedded in the solar wind that flows out from the Sun, as detected by the NASA's Parker Solar Probe's FIELDS instrument. (NASA/Goddard/CIL via AP)

Scientists released the first results from the mission Wednesday. They observed bursts of energetic particles never seen before on such a small scale as well as switchback-like reversals in the out-flowing solar magnetic field that seem to whip up the solar wind.

NASA’s Nicola Fox compared this unexpected switchback phenomenon to the cracking of a whip.

“They’re striking and it’s hard to not think that they’re somehow important in the whole problem,” said Stuart Bale of the University of California, Berkeley, who was part of the team.

Researchers said they also finally have evidence of a dust-free zone encircling the sun. Farther out, there’s so much dust from vaporizing comets and asteroids that one of 80 small viewfinders on one instrument was pierced by a grain earlier this year.

“I can’t say that we don’t worry about the spacecraft. I mean, the spacecraft is going through an environment that we’ve never been before,” Fox said.

Launched in 2018, Parker has come within 15 million miles (25 million kilometers) of the sun and will get increasingly closer — within 4 million miles (6 million kilometers) — over the next six years. It’s completed three of 24 orbits of the sun, dipping well into the corona, or upper atmosphere. The goal of the mission is to shed light on some of the mysteries surrounding the sun.

Parker will sweep past Venus on Dec. 26 for the second gravity-assist of the $1.5 billion mission and make its fourth close solar encounter in January.

The findings in the journal Nature were made during a relatively quiet phase of solar activity.

“We’re just starting to scratch the surface of this fascinating physics,” said Princeton University’s David McComas, the chief scientist of one of the spacecraft’s instruments.

As Parker gets even closer to its target, the sun will go through an active phase “so we can expect even more exciting results soon,” University College London’s Daniel Verscharen wrote in an accompanying editorial. Verscharen was not part of the mission.

Over the summer, Fox shared these early results with solar astrophysicist Eugene Parker, 92, professor emeritus at the University of Chicago for whom the spacecraft is named. He expressed excitement — “wow” — and was keen to be involved.

It’s the first NASA spacecraft to be named after a person still alive. Parker attended its launch last year from Cape Canaveral.

NASA rover set for most difficult Martian touchdown yet