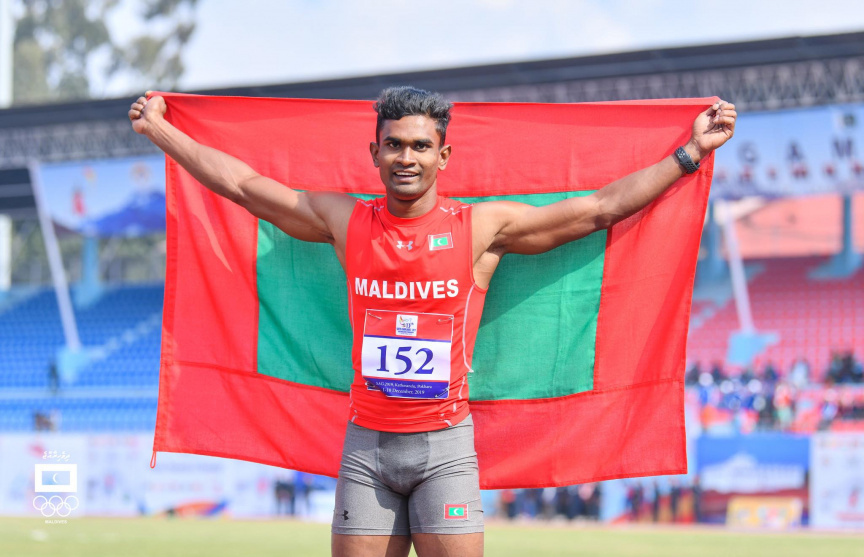 Maldivian runner Hassan Saaid after competing in the 100-meter running event of South Asian Games 2019, in Kathmandu Nepal. Saaidh won the gold medal in this event on December 3, 2019. (Photo/MOC)

The Parliament has paid tribute to the Maldivian athlete Hassan Saaid, who won the gold medal at the 13th South Asia Games yesterday.

Saaid won the gold medal at the 100-meter sprint event yesterday by crossing the finish line in 10.49 seconds. Saaid's victory was celebrated jubilantly all over the country and the Parliament also joined in on congratulating the athlete.

Speaking in today’s Parliamentary session, Speaker Mohamed Nasheed displayed Saaid's winning pictures on the screens inside the Parliament. Nasheed said to MPs “This is the best man. There is no one faster than him, (He is) the fastest man in South Asia.” to which all the MPs clapped in congratulation.

Nasheed also thanked all the officials involved in preparing and training Saaid for the event.

Saaid is also the first Maldivian to win a gold medal for the country in athletics when he won the gold medal in the Indian Ocean Island Games in 2015.