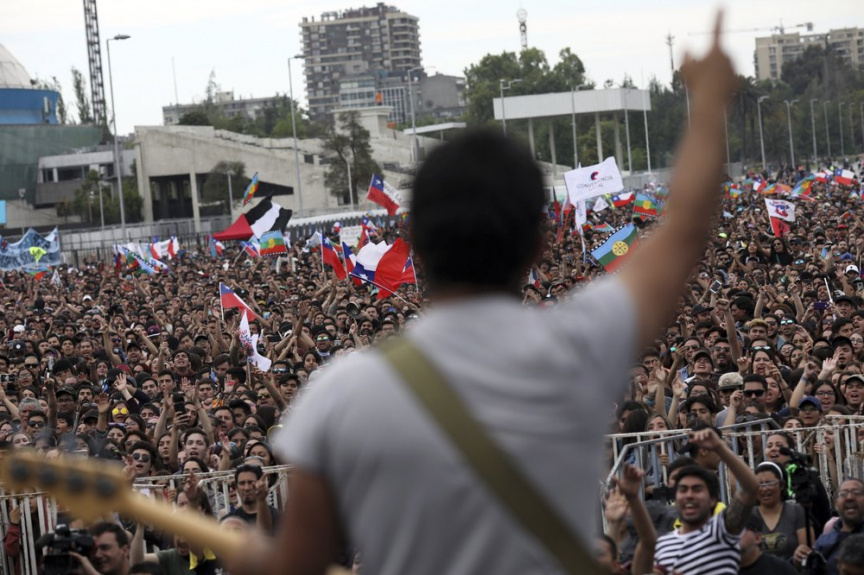 A musician gestures to the public in O'Higgins Park during an anti-government music concert in Santiago, Chile, Sunday, Oct. 27, 2019. Days of demonstrations have been calling for better pay, pensions, schools, housing and medical care, among many other demands. (AP Photo/Rodrigo Abd)

SANTIAGO, Chile (AP) — It’s not about a 4-cent hike in subway prices.

The decision to add 30 pesos to the cost of a ticket on Latin America’s most modern public transportation system this month drew little attention inside or outside Chile, at first. People quietly fumed. A week later, high-school students launched four days of turnstile-jumping protests. Crowds of angry youths built up inside metro stations.

With no warning, on the afternoon of Oct. 18, they set fire to stations, then trains. Then grocery, department stores and pharmacies went up in flames. Hundreds of thousands of people were left stranded at home or on the streets without public transport. But instead of blaming the young protesters, Chileans from almost all walks of life used social media to call for protests against years of government mismanagement.

Santiago exploded into a week of massive street protests that culminated Friday with more than a million people in the heart of the capital and other major cities — the largest demonstrations ever in the country, according to multiple historians.

With the world wondering how modern, prosperous Chile had erupted into chaos, a protest concert drew 15,000 on Sunday to green and shady O’Higgins Park in central Santiago. There, Chileans said the rise in the cost of a metro ticket had been merely the spark that set off years of frustration with the dark underbelly of their country’s long drive to be the most market-driven economy in Latin America.

“What we Chileans want is equal treatment for all, that the cake be divided up fairly,” said Mario Gonzalez, 34, who runs a t-shirt printing business. “We don’t want anything for free; we just want to pay a fair price.”

Young, old, poor and middle-class, protesters said they were united by frustration with the so-called neoliberal model that has left Chile with region-topping prosperity along with a widely criticized private pension system, and two-tiered health and education systems that blend the public and private, with better results for the minority who can afford to pay, protesters said.

Many Chileans talk of waiting a year for an appointment with a specialist, or families receiving calls to finally set up appointments for loved ones who died months earlier. Hundreds of thousands are hobbled by educational loans that can follow them into their 40s and even 50s.

“Countries with high levels of inequality such as Chile are like recovering alcoholics. They can be well for many years, but they shouldn’t forget they have a problem,” said Patricio Navia, an adjunct assistant professor at the Center for Latin American and Caribbean Studies at New York University. “Inequality is a threat to Chile’s stability.”

Alexis Moreira Arenas, 37, and his wife Stephanie Carrasco, 36, are comfortably in the middle class but he pays some 10 percent of his salary to a privately run pension system that generates steady profits for fund managers but an average pension around $300 a month, roughly a third of what a retired person needs to live. She is still paying off $110 a month in college loans, about 10 percent of their income. Another 30 percent goes to private preschool for their 2-year-old son.

“It’s a series of problems that all come together; public transport, education, health, because the health system here works really badly,” Moreria said. “Above all, it’s a question of inequality.”

Protesters in O’Higgins Park said President Sebastián Piñera’s firing of his Cabinet Saturday would do nothing to calm the streets. Almost uniformly, they said they would continue protesting until they saw fundamental changes in Chile, starting with the replacement of the 1980 constitution, written under military dictator Augusto Pinochet, that creates the legal basis of Chile’s market-driven system. Already, there were calls Sunday evening on Twitter, Instagram, Facebook and WhatsApp for protests every day of the coming week.

“The whole constitution makes me angry,” said Alan Vicencio, a 25-year-old call-center worker. “The constitution allowed the privatization of every aspect of our lives and it’s being doing it for more than 30 years.”

From afar, Chile has been a regional success story — under democratically elected presidents on the left and right, a free-market consensus has driven growth up, poverty down and won Chile the region’s highest score on the United Nations Human Development Index, a blend of life expectancy, education and national income per capita.

In 2010, Chile became the second Latin member of the Organization for Economic Cooperation and Development, after Mexico. Next month, Piñera will host the Asia-Pacific Economic Cooperation forum, followed by the 25th United Nations Climate Change Conference in December.

Meanwhile, a 2017 UN report found that the richest 1% of the population earns 33 percent of the nation’s wealth. That helps make Chile the most unequal country in the OECD, slightly worse than Mexico. Piñera himself is a billionaire, one of the country’s richest men.

Pisarro said her mother, a retired clothing-factory worker, bakes at home and sells empanadas and fried bread in their neighborhood on the outskirts of Santiago, often until 11 p.m., in order to support herself, her granddaughter and her great-grandson on a pension of $165 a month.

“Average people see this prosperous country, the star of Latin America, they see skyscrapers and four Maseratis sold every month, a luxury shopping district where they sell purses worth $4,000, and where are they compared to five years ago? They’re stuck,” said Marta Lagos, director of the Santiago-based polling firm Latinobarometro. “This 30 peso rise in metro fares was the straw that broke the camel’s back. They said ‘Not a step further. We’re tired of waiting.’”