Home Minister: Youth have a pivotal role in rescuing the nation in times of trouble 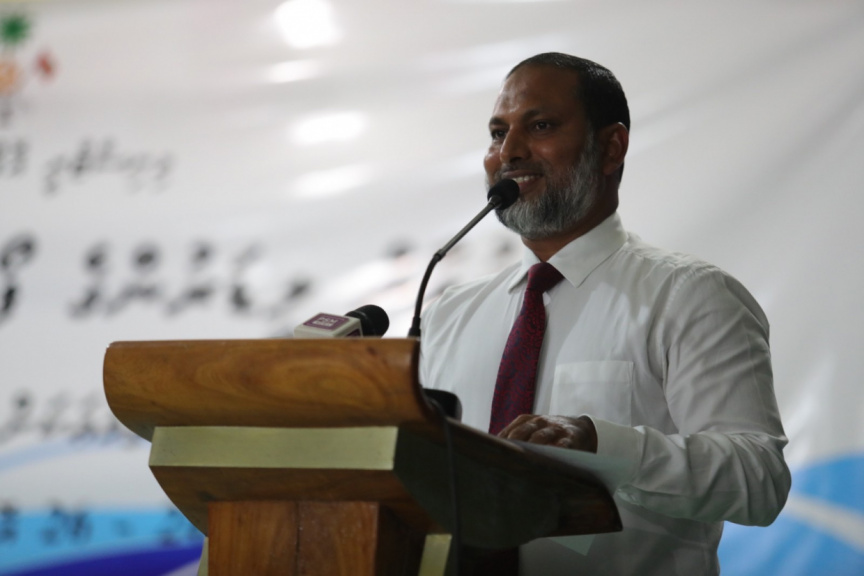 Home Minister Sheikh Imran Abdulla speaks at the ceremony held in A. A. Mathiveri to mark the conclusion of the 4th Youth Leaders Forum on October 26, 2019. (Photo/Home Ministry)

Home Minister Sheikh Imran Abdulla says that any young man or women had the power to revolutionize the nation, and have historically played a pivotal role in rescuing the nation in times of trouble.

He made the remark at ceremony held in A. A. Mathiveri to mark the conclusion of the 4th Youth Leaders Forum on Saturday.

Imran said that the ability to stand up and progress as a nation depended on the strength of the backbone of the nation’s youth.

He also said that the future prosperity of the nation lay in the education, well-being, talent and skill of the nation’s youth.

“If we want to make tomorrow prosperous, if we want to live in contentment, if we want prosperity and wealth in our community, it must start with our youth,” said Imran.

He also highlighted on examples in Islamic and Maldivian history where young men and women took initiative to rescue their respective nations in times of trouble.

He took the example of Sulṭan al-Ghaazee Mohamed Thakurufaanu al-A'uẓam – who led the movement to drive out Portuguese colonizers from Maldives in 1573 and Martyr Corporal Adam Hussain – who died from gunshot wounds as he guarded the gates of the military headquarters in the coup attempt of November 3, 1988 as local examples of youth leaders to rescued Maldives in times of great trouble.

Imran: Corrections was not negligent in death of inmate

Home Minister called out for answering as AP leader