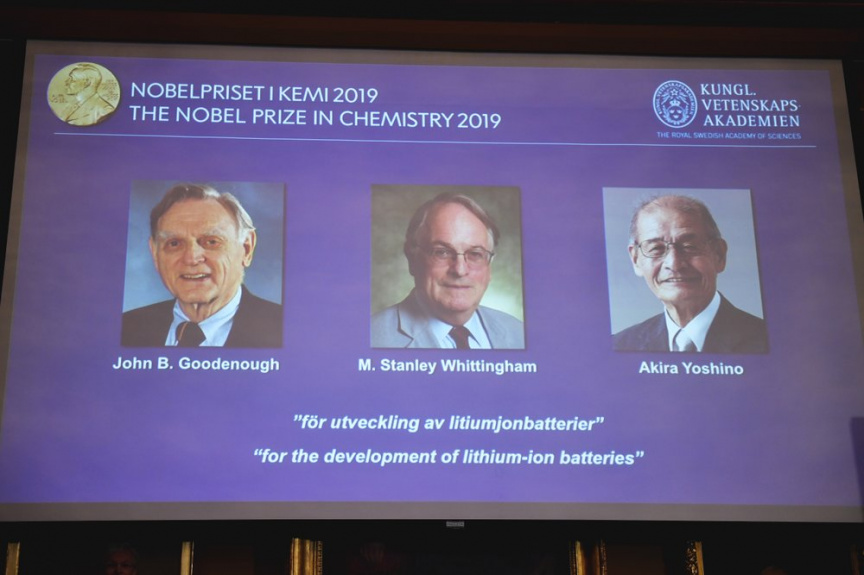 A screen displays the laureates of the 2019 Nobel Prize in Chemistry, from left, John B. Goodenough, M. Stanley Whittingham, and Akira Yoshino "for the development of lithium-ion batteries", during a news conference at the Royal Swedish Academy of Sciences in Stockholm, Sweden, Wednesday Oct. 9, 2019. (Naina Helen Jama/TT via AP)

STOCKHOLM (AP) — If you’re reading this on a cellphone or laptop computer, you might thank the three winners of this year’s Nobel Prize in chemistry for their work on lithium-ion batteries.

The batteries power cellphones, laptops, electric cars and countless other devices of modern life, and could become the foundation for a greener future. Batteries that economically store energy from renewable sources like the wind and sun open up new possibilities to curb global warming.

“This is a highly charged story of tremendous potential,” quipped Olof Ramstrom of the Nobel committee for chemistry.

Goodenough, who is considered an intellectual giant of solid state chemistry and physics, is the oldest person to ever win a Nobel Prize — edging out Arthur Ashkin, who was 96 when he was awarded the Nobel for physics last year.

Goodenough said he is grateful he was not forced to retire at age 65.

“So I’ve had an extra 33 years to keep working,” he told reporters in London, where he was to accept another prize.

In an interview with The Associated Press, Whittingham said he had no inkling that his work decades ago would have such a profound impact.

“We thought it would be nice and help in a few things, but never dreamed it would revolutionize electronics and everything else,” he said.

And in Japan, Yoshino said he hoped the technology could enable greater adoption of renewable energy sources.

“We must create a society where electricity is generated by renewables in order to resolve the climate change problem,” he said.

The three scientists each had unique breakthroughs that laid the foundation for the development of a commercial rechargeable battery, an alternative to older alkaline batteries containing lead, nickel or zinc that had their origins in the 19th century.

All batteries store chemical energy that can be converted into electricity. But earlier batteries were unsafe, too heavy or not rechargeable — limiting their practical use

In the 1970s, Whittingham, who had researched superconductors at Stanford University, was hired by Exxon at a time when the petroleum giant was investing in research on energy storage.

Whittingham harnessed the tendency of lithium — the lightest metal — to give away its electrons to make a lightweight battery capable of generating just over two volts.

By 1980, building on Whittingham’s work, Goodenough had doubled the capacity of the battery to four volts by using cobalt oxide in the cathode — one of two electrodes, along with the anode, that make up the ends of a battery.

But that battery remained too unstable for general commercial use. That’s where Yoshino’s work in the 1980s came in. He eliminated the volatile pure lithium from the battery, and instead opted for lithium ions that are safer. He added another material in one electrode that reduced the potential for fires.

This step paved the way for the first lightweight, safe, durable and rechargeable commercial batteries to be built and enter the market in 1991.

Whittingham called the prize a “recognition for the whole field,” adding that “hundreds of people have worked on lithium-ion batteries.”

Building on this foundation could enable broader use of renewable energy sources that generate power at variable times.

“Batteries are the bridge between when the sun is shining and when people need to use the energy,” said Amanda Morris, a chemist at Virginia Tech University.

The three winners will share a 9-million kronor ($918,000) cash award. Their gold medals and diplomas will be conferred in Stockholm on Dec. 10 — the anniversary of prize founder Alfred Nobel’s death in 1896.

The announcement came on the third day of Nobel week.

On Tuesday, Canadian American James Peebles won the Nobel physics prize for his theoretical discoveries in cosmology together with Swiss scientists Michel Mayor and Didier Queloz, who were honored for finding an exoplanet — a planet outside our solar system — that orbits a solar-type star.

Americans William G. Kaelin Jr. and Gregg L. Semenza and Britain’s Peter J. Ratcliffe won the Nobel for advances in physiology or medicine on Monday. They were cited for their discoveries of “how cells sense and adapt to oxygen availability.”

Two Nobel literature laureates are to be announced Thursday — one for 2018 and one for 2019 — because last year’s award was suspended after a sex-abuse scandal rocked the Swedish Academy. The coveted Nobel Peace Prize is Friday and the economics award will be announced on Monday.

The chemistry laureates said the field and its applications are still a work in progress.

“Lithium-ion itself is still full of unknowns,” said Yoshino.

He said he visits Goodenough nearly every year in Texas.

Goodenough, in his own way, seemed to return the favor, telling reporters that in all of his 97 years: “What am I most proud of? I don’t know, I would say all my friends.”

Nobel for Swede who unlocked secrets of Neanderthal DNA