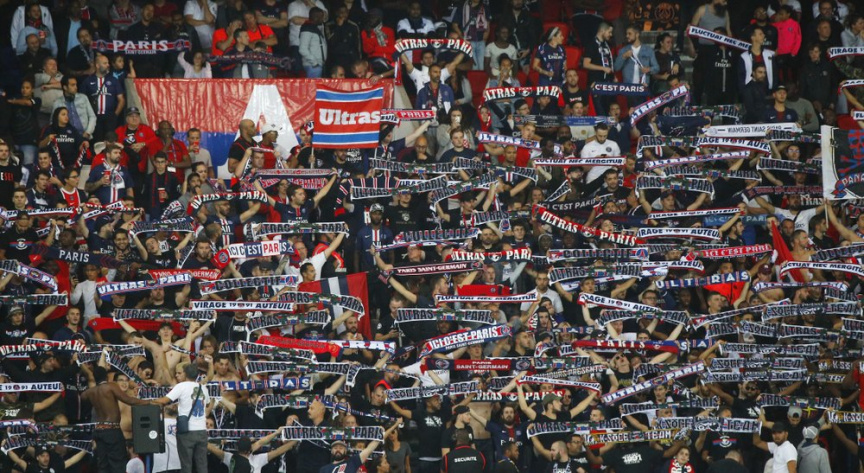 PSG's supporters gather in the stands during the French League One soccer match between Paris Saint Germain and Nimes at the Parc des Princes Stadium in Paris, Sunday, Aug. 11, 2019. (AP Photo/Francois Mori)

PARIS (AP) — Fans expressed their anger at Neymar with chants and banners demanding his departure as Paris Saint-Germain started the defense of its French league title with a 3-0 win over Nimes on Sunday.

Neymar, who reported late to training from his summer holidays and has been linked with a move away from PSG to Barcelona or Real Madrid, was not included in coach Thomas Tuchel’s squad.

Some PSG hardcore fans mocked Neymar’s behavior with one banner at the Parc des Princes saying “Get lost Neymar”.

Neymar, who became the most expensive player in the world when he moved from Barcelona to PSG for 222 million euros (about $250 million) in 2017, has made clear in recent weeks that he wants to leave the club.

In his absence, PSG dominated from the start and monopolized possession to camp in Nimes’ half of the pitch.

Edinson Cavani put the hosts in the lead from the penalty spot in the first half before Kylian Mbappe scored his 63rd league goal near the hour mark and then set up Angel Di Maria’s goal.

Mbappe was in superb form with his trademark dribbles and bursts of speed, while new signing Pablo Sarabia worked well with his teammates and delivered several good passes from the right flank which destabilized the visitors’ defense.

Nimes held out until Pablo Martinez was sanctioned for an unintentional hand ball in the box following a VAR review. Cavani took the penalty and beat goalkeeper Paul Bernardoni with a powerful strike in the 24th.

Sarabia was dangerous again in the 34th with a fine volley at the far post that drew a spectacular save from Bernardoni, and Cavani missed an easy chance from close range with a poor touch from Mbappe’s cross.

Mbappe fired the ball into the top left corner in the 57th for 2-0 after connecting with a cut-back pass from Juan Bernat, and then delivered a perfect assist to the unmarked Di Maria inside the area. The Argentina forward, who came on as a substitute, controlled the ball and beat Bernardoni with a left-footed shot for his 40th French league goal.

Neymar to stand trial in Spain for Barcelona transfer