Rebuked by many, Saudi crown prince feted at G20 summit 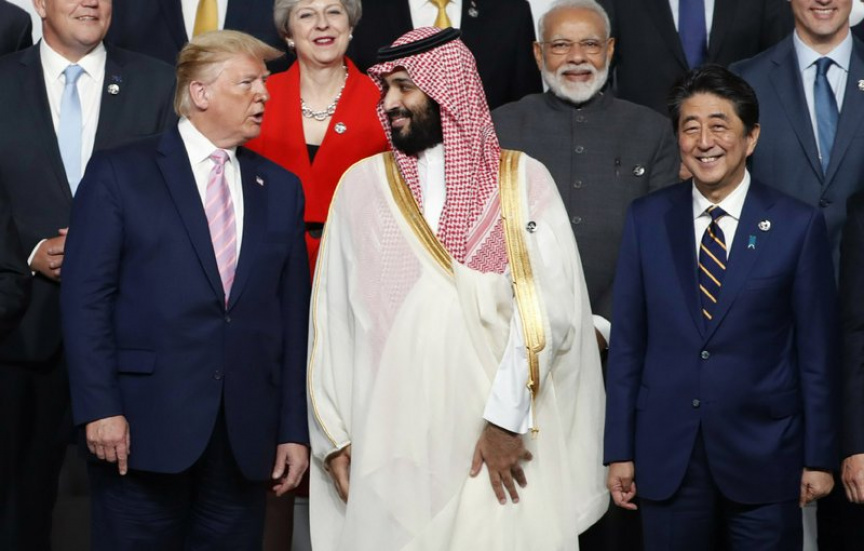 OSAKA, Japan (AP) — For many he’s an international pariah, but you wouldn’t know it by the lavish reception Saudi Crown Prince Mohammed bin Salman has received at the G-20 summit this week.

He beamed as he stood front and center, sandwiched between President Donald Trump and Japanese Prime Minister Shinzo Abe, for a group photo. He exchanged an impish grin as he sat down next to Russian President Vladimir Putin. He posed with South Korean President Moon Jae-in and a group of flag-waving kids ahead of an earlier signing ceremony for $8 billion in deals.

Even as rebukes pile up elsewhere — a U.N. expert has called for an investigation of his alleged role in the killing of a prominent journalist, and a growing number of Americans are questioning their nation’s support for his kingdom and its role in the war in Yemen — some leaders in Osaka have gone out of their way to make sure the prince feels comfortable.

It’s not clear if any leader in Osaka raised concerns about the killing last October of Saudi writer Jamal Khashoggi, who had criticized the Saudi heir in columns for The Washington Post. But the prince seemed completely at ease in public on Friday and Saturday.

These high-profile gatherings can often have a club-like feel to them, with well-dressed leaders standing around and talking — sometimes intensely, sometimes convivially — before and after the photo-ops and public statements. In the absence of many details about what’s happening behind closed doors, observers are forced to spend a lot of time parsing body language. And, at least when the cameras were rolling, that language has been overwhelmingly positive for the prince.

In addition to standing next to Trump in the center part of the front row for the first group photo, the prince was seated next to the summit’s host, Abe, at the official opening ceremony, possibly a reflection of Saudi Arabia’s role as host of next year’s G-20 gatherings.

As the prince — easily one of the tallest leaders, and striking in his flowing, ankle-length robes — strode from meeting to meeting, or wandered among the other leaders before the summit’s set-piece ceremonies, he often flashed a broad smile. At Saturday’s panel on women’s empowerment, for instance, he sat in the front row, chatting amicably with other leaders.

Trump, who has long been loath to scold authoritarian leaders for human rights abuses, seemed to go out of his way at times to shepherd Prince Mohammed, at one point patting him on the back as they walked together.

As the two sat down over breakfast Saturday, Trump praised his “friend” for taking steps to open up the kingdom and extend freedoms to Saudi women.

Trump also ignored reporters’ questions about the prince’s alleged role in Khashoggi’s death. A White House statement said they discussed “Saudi Arabia’s critical role in ensuring stability in the Middle East and global oil markets, the growing threat from Iran, increased trade and investments between the two countries, and the importance of human rights issues.”

The U.S. president sees a close relationship with Saudi Arabia as a lynchpin to Washington’s Middle East strategy to counter Iran. Trump has brushed aside Khashoggi’s killing and said it has already been investigated. A Saudi pledge to spend billions of dollars on U.S. military equipment, Trump said, “means something to me.”

Following a monthslong inquiry, Agnes Callamard, the U.N. special rapporteur on extrajudicial, summary or arbitrary executions, recently said she’d concluded that Khashoggi was a victim of a “deliberate, premeditated execution, an extrajudicial killing for which the state of Saudi Arabia is responsible.”

Saudi Arabia denies the 33-year-old crown prince had any knowledge of the killing of Khashoggi. The kingdom has put on trial 11 suspects, some of whom worked directly for the prince. But his closest former adviser, Saud al-Qahtani, who was sanctioned by the United States after the killing, is not among those on trial.

Take South Korea, for instance. In Seoul before the summit, Saudi Arabia and South Korea signed 10 memorandums of understanding and contracts that would be worth $8.3 billion, according to Seoul’s presidential office. Moon, the president, hosted a luncheon at his mansion that was attended by some of South Korea’s most powerful businessmen.

South Korea gets more than 70% of its crude oil from the Middle East. Seoul is the world’s fifth largest importer of crude oil and Saudi Arabia has been its biggest supplier. Prince Mohammed, during his meetings with Moon, promised to help with possible fuel shortages in case of supply disruptions caused by Middle East turmoil.

Not everyone was happy about his reception.

Some South Koreans criticized the country’s two major English newspapers — The Korea Herald and The Korea Times — for using their front pages Wednesday to publish identical full-page ads by S-Oil, a South Korean oil refining company that is a subsidiary of the giant Saudi oil company Aramco. The ads printed the national flags of Saudi Arabia and South Korea side by side and contained the message, “We welcome HRH Prince Mohammed bin Salman Al-Saud, Crown Prince, Deputy Prime Minster, Minister of Defense.”

There was also criticism of a massive photo of the prince unfurled on the Seoul headquarters of S-Oil.

The worries about the abuse claims may not resonate in the G-20 meetings. But there’s mounting concern about the ties between the kingdom and the many Western nations that have relied on its natural resources and political position.

In a recent opinion piece in The New York Times, David Wearing, the author of “AngloArabia: Why Gulf Wealth Matters to Britain,” said strategic bonds between Saudi Arabia and the Atlantic powers may survive, “but the existential threats are now plain to see, and if anyone in Riyadh, Washington or London has a serious plan to preserve the status quo, they are keeping it a closely guarded secret.”