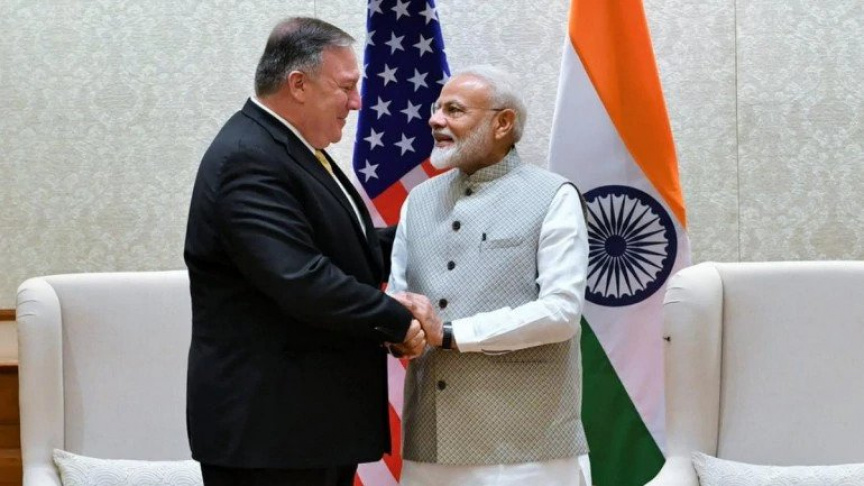 NEW DELHI (AP) — The U.S. secretary of state and his Indian counterpart downplayed growing disagreements over trade and tariffs on Wednesday, arguing that the two countries can work through their issues.

Pompeo acknowledged that the two countries have some differences.

“Great friends are bound to have disagreements,” Pompeo told reporters after meeting with Jaishankar. “The United States has been clear we seek greater market access and the removal of trade barriers.”

Jaishankar said there was a “need to filter through the noise and get down to the basics of the relationship.”

Pompeo arrived in New Delhi late Tuesday after visiting Saudi Arabia, the United Arab Emirates and Afghanistan on a trip aimed at building a global coalition to counter Iran.

His visit is the first by a high-level U.S. official since Modi’s reelection last month. The countries call each other strategic partners despite retaliatory tariffs they imposed on some goods this month.

Another irritant in their relationship is India’s plan to purchase Russia’s S-400 air defense system. U.S. has shown reservations about the deal. But still the U.S. has become India’s top defense supplier in the last two years. India’s trade with the U.S. has also seen steady growth and is currently about $150 billion annually.

Jaishankar said the two discussed defense cooperation and that India would be guided by its national interests.

Pompeo’s visit comes ahead of a planned meeting between President Donald Trump and Modi on the sidelines of the Group of 20 summit in Japan later this week.

Indian officials say they have few differences with the U.S. over political and strategic issues including on Iran, but have cautioned the two countries need to be careful on trade and commerce.

India stopped oil purchases from Iran after a U.S. sanctions waiver ran out in May, but Indian officials have continued working for a renewal of the waiver amid escalating tensions between the U.S. and Iran. Indian officials say they understand the U.S. concerns regarding Iran, but their country has taken an economic hit.

Jaishankar said global energy supplies should remain stable, predictable and affordable. “I think that’s a concern to which Secretary Pompeo was certainly very, very receptive. I think he understands that this is today the world’s fifth largest economy, which imports 85% of its energy, a large part of it from the Gulf. So I think he certainly gets ... what our interests are,” he said.

Pompeo said the two leaders didn’t discuss a lifting of waivers but they agreed to work through the problems.

He said later Wednesday that the U.S. appreciated India’s efforts in cutting of oil from Iran, and “we’re doing everything we can to ensure you’ve adequate crude imports.”

On Iran, Pompeo repeated that Tehran “is the world’s largest state sponsor of terror” and that the Strait of Hormuz needs to be kept open.

“There’s a shared understanding of threat and a common purpose to ensure that we can keep that energy at the right prices, and deter this threat, not only the threat in the narrow confines of the Middle East, but the threat that this terror regime poses to the entire world,” he said.

“Working together to further deepen our strategic partnership,” Kumar tweeted.

Before Pompeo’s arrival in India, hundreds of supporters of left-wing groups marched in central New Delhi to protest his visit and denounce American policies in the Middle East. They urged the Indian government not to cut off imports of oil from Iran, as the U.S. has demanded.

Pran Sharma, a protester, said there was a “bigger game” behind “the trade war” between India and the U.S.

“That is the invasion of Iran, for which it (the U.S.) is making preparations. How it can get cooperation from India?” he said.

India denies that it asked Trump to mediate in Kashmir