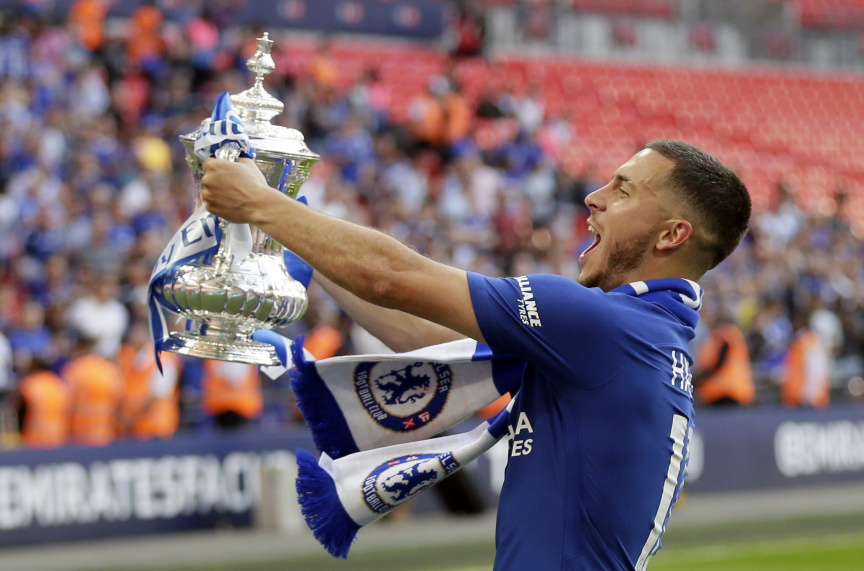 MADRID (AP) — Real Madrid signed Eden Hazard from Chelsea on Friday for its second major offseason addition, and reportedly its most expensive ever.

The 28-year-old forward joined Madrid on a five-year contract and a transfer fee reported to be around 100 million euros ($113 million) plus variables, which would make him the club's biggest signing.

Madrid is rebuilding after one of the worst seasons in club history and had added forward Luka Jovic from Eintracht Frankfurt earlier this week.

The Spanish club hadn't made any blockbuster signings in years and was yet to bring in a top player to try to replace Cristiano Ronaldo after the Portugal forward left to join Juventus last season.

Real Madrid called Hazard "one of the best players in the world," known for his "attacking flair, assists and goals."

"Hazard has world class technique, vision, dribbling, pace and finishing," Real Madrid said. "These qualities saw him stand out in his seven years in England."

Hazard had already indicated his final game for Chelsea was last week's Europa League final victory over Arsenal. With two goals in his 352nd appearance for the club, he finished with a total of 110.

"Although it is with sadness we say goodbye to Eden and we made it absolutely clear to him the club wished him to stay," Chelsea director Marina Granovskaia said, "we respect the decision he has made to take on a new challenge in a different country and follow his childhood dream of playing for Real Madrid."

Since joining Chelsea from French club Lille in 2012, Hazard has won both the Premier League and Europa League twice, the FA Cup and the League Cup. The Belgium international, who still had a year left in his contract with Chelsea, had already tried to leave the English club a year ago.

"The memories he leaves us with will not fade," Granovskaia said. "He provided all who watched Chelsea play with great entertainment and many match-winning contributions, and for that we thank Eden enormously.

"He has been a model professional throughout his time at the club, a wonderful individual to have around and a joy to work with."

Hazard was a standout player with Belgium at the World Cup in Russia last year, helping his team earn a historic third-place finish. He scored three goals in six games and won the man of the match award three times. He was named the tournament's second-best player, behind Croatia's Luka Modric, his new Real Madrid teammate.

Hazard is expected to be officially introduced to Madrid fans next week after undergoing a medical.

Real Madrid finished third in the Spanish league and was eliminated early in the Champions League and the Copa del Rey. It went through two coaching changes this season, its first without Ronaldo. Zinedine Zidane returned to the helm a few months ago to try to get the team back on track after winning three straight Champions League titles.

Madrid earlier this year had signed Brazilian defender Eder Militao, who will join from Porto next season. Teenage forward Rodrygo, bought from Brazilian club Santos for nearly 45 million euros ($50.6 million) last year, also will be added to the squad for next season.