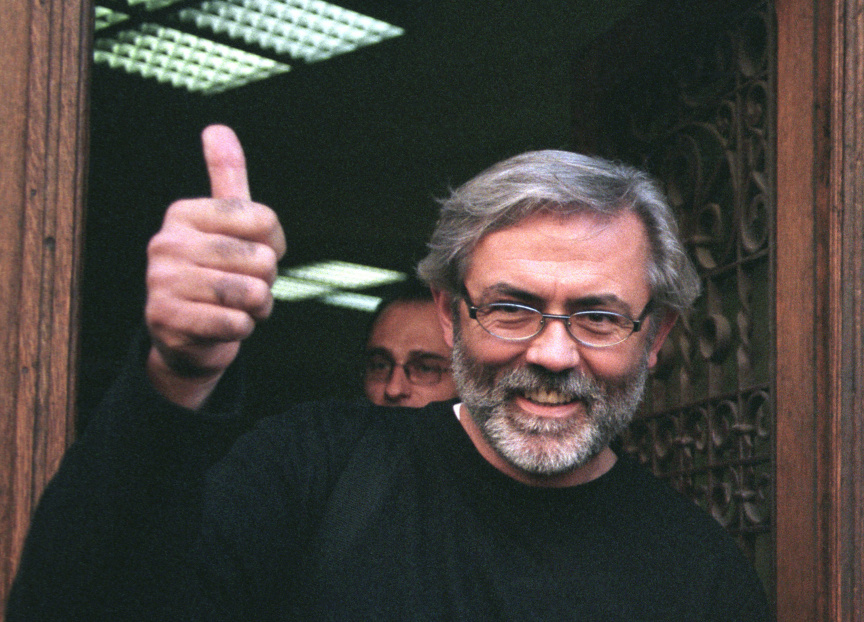 This is undated file photo of Slavko Curuvija the owner and editor of two independent newspapers at the time, was gunned down on April 11, 1999, in Belgrade, Serbia. (AP Photo/Pedja Milosavljevic, File)

BELGRADE, Serbia (AP) — A Serbian court on Friday sentenced four former state security members to up to 30 years in prison for the killing two decades ago of a prominent journalist, who was a critic of then-leader Slobodan Milosevic.

Slavko Curuvija, the owner and editor of two independent newspapers at the time, was gunned down outside his home on April 11, 1999, just days after the start of NATO's air campaign launched to stop Serbia's crackdown in Kosovo.

The trial over Curuvija's murder was seen as important in how Serbia deals with Milosevic-era crimes. Serbia is seeking European Union entry after years of Balkan wars in the 1990s.

The court sentenced the ex-head of state security Rade Markovic and another man to 30 years in prison, and the two others to 20 years in jail each. Markovic is already serving a 40-year sentence in connection with another Milosevic-era political attack.

The court did not specify who ordered the attack on Curuvija.

"The ruling sends a clear message that crimes against opponents cannot remain unpunished and that perpetrators of attacks on journalists for publicly spoken words are not untouchable," the Slavko Curuvija Foundation said in a statement.

Days before he was gunned down, Curuvija was singled out by Milosevic's powerful wife at the time, Mirjana Markovic, as a supporter of the NATO bombing.

Markovic fled to Russia in 2003, while Milosevic died in 2006 during a genocide trial at a UN war crimes court.

PM May woos UK opponents and EU leaders over Brexit