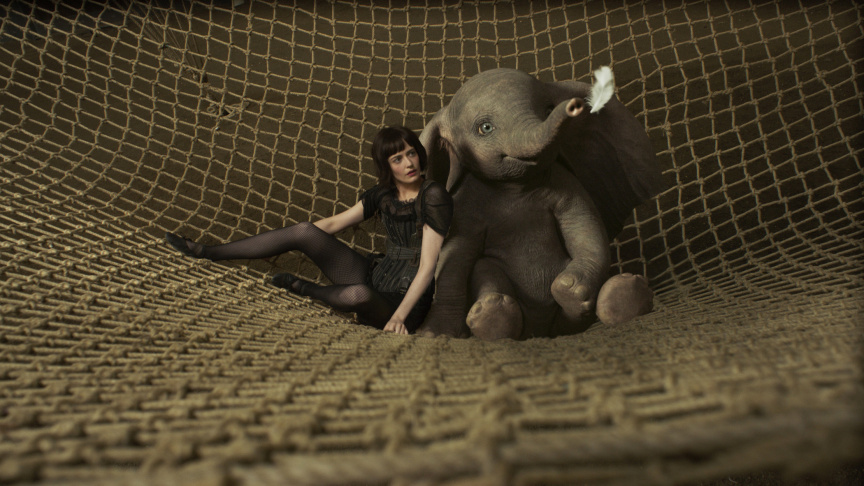 This image released by Disney shows Eva Green in a scene from "Dumbo." (Disney via AP)

The Walt Disney Co. said Sunday that the Tim Burton-directed film has earned an estimated $45 million domestically from 4,259 locations against a $170 million production budget. It's less than half of what "Beauty and the Beast," ''The Jungle Book" and Burton's own "Alice in Wonderland" opened to.

The remake of the 1941 animated film stars Colin Farrell and Danny DeVito. It got mixed to negative reviews from critics and currently has a middling 53 percent on Rotten Tomatoes.

Audiences who did turn out, however, had a different response than the critics and gave the film an A- overall, according to CinemaScore.

"We think it's a solid start," said Cathleen Taff, Disney's president of theatrical distribution. "We're encouraged and hopeful with audience word of mouth."

Disney has two other high-profile live-action remakes coming out this year in "Aladdin" (May 24) and "The Lion King" (July 19).

"I don't think this is a mandate against live-action remakes. But sometimes when you don't have the reviews, it can affect it," said Paul Dergarabedian, Comscore's senior media analyst. "For Disney, the bar is set so high. This is just a little speed bump on what is already a spectacular year for Disney."

"Dumbo" did bump Jordan Peele's "Us" to second place. "Us" added $33.6 million, down only 53%, bringing its domestic total to $128.2 million in its second week. The Lupita Nyong'o doppelganger movie cost only $20 million to produce.

"For a horror, which generally have the scariest drops in the business, 'Us' is really holding in there," Dergarabedian said. "It's good news for Jordan Peele."

Easing the "Dumbo" disappointment, Disney and Marvel's "Captain Marvel" landed in third place in weekend four with an additional $20.5 million. It's now earned over $350 million in North America and is expected to cross the $1 billion mark globally sometime this week.

The teen drama/romance "Five Feet Apart" with Cole Sprouse and Haley Lu Richardson took fourth place with $6.3 million, down only 27% in its third week.

And the pregnancy movie "Unplanned" rounded out the top five with $6.1 million from only 1,059 theaters. It's another success for Pure Flix, which targets the faith-based audience.

"Serving that underserved audience can pay off quite well," Dergarabedian said.

Not so lucky was "The Beach Bum," a stoner-odyssey from the provocative filmmaker Harmony Korine starring Matthew McConaughey. It grossed only $1.8 million from 1,100 locations in its first weekend.

The weekend overall is down around 2% and the year is still lagging about 16.4%.

"Next week is going to have two of the biggest genres hitting the multiplex simultaneously," noted Dergarabedian. The well-reviewed superhero pic "Shazam!" debuts along with a "Pet Sematary" remake.

Estimated ticket sales for Friday through Sunday at international theaters (excluding the U.S. and Canada), according to Comscore: