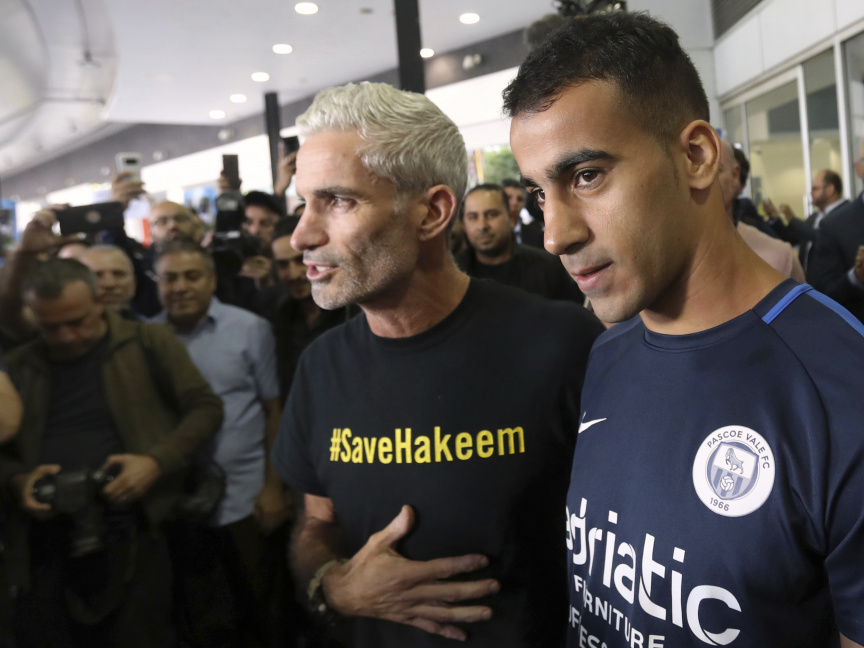 CANBERRA, Australia (AP) — A refugee soccer player thanked Australians on his return home Tuesday hours after the threat of extradition to Bahrain was lifted and three months after he was detained in Thailand.

Thailand had come under great pressure from Australia's government, sporting bodies and human rights groups to send Hakeem al-Araibi back to Australia, where he has refugee status and plays semi-professional soccer.

Former Australia national team captain Craig Foster, who has been leading the campaign for al-Araibi's release, said he could not sleep until he received word from the Australian embassy in Bangkok that the 25-year-old's flight had left.

Foster was by al-Araibi's side with an arm around the footballer as they faced the crowd.

"So this is the man, probably the most famous young man in Australia right now," Foster said. "Something of this magnitude doesn't happen without an incredible team behind, and there's been an amazing coalition of people, right from around the world."

"I want to thank all Australians for their support in achieving this outcome," Morrison tweeted.

"We are grateful to the Thai government and thank them for the way they have engaged with us to enable Hakeem to return to Australia," he added.

Anesthetist Richard Harris and his dive buddy Craig Challen, a retired veterinarian, were last month named joint winners of Australian of the Year Award trophies, one of Australia's most prestigious awards.

"The issue had just gained more and more prominence and Richard and I both realized that we're in a position to hopefully give the issue a little bit of a nudge and contribute in our own little way," Challen told Australian Broadcasting Corp.

Thai prosecutors on Monday submitted a request to a court to withdraw the case to extradite al-Araibi to Bahrain, where he faces a 10-year prison sentence for an arson attack that damaged a police station. He has denied those charges and says the case is politically motivated.

Prosecutors made the decision after Thailand's foreign ministry sent their department a letter Monday indicating that Bahrain had withdrawn its request for al-Araibi, a Thai official said.

Officials in Bahrain, an island kingdom off the coast of Saudi Arabia that's home to the U.S. Navy's 5th Fleet, said the country "reaffirms its right to pursue all necessary legal actions against" al-Araibi.

Al-Araibi, a former Bahraini national team player, says he fled Bahrain due to political repression and that he fears torture if he returns.

He was detained at the request of Bahrain relayed through Interpol upon his arrival in Bangkok in November while on a honeymoon with his wife.

Thailand's foreign ministry said last week that al-Araibi was detained because Australian authorities had forwarded them an Interpol Red Notice that Bahrain was seeking his arrest. Australian police acknowledged doing so, but there have been questions raised about why the Red Notice appeared to have been issued just before al-Araibi departed, and whether Bahraini authorities had been tipped off about his travel plans.

With al-Araibi now free, attention has quickly shifted to who is to blame for his predicament in Thailand.

"I'd encourage the government to be upfront about this," Wong said. "I think the Australian community does want to know how this occurred and we do need to consider whether the system is fit-for-purpose."

Australian Federal Police should not have advised Thailand that someone subject to a Red Notice was traveling. Australia's Department of Foreign Affairs and Trade should have advised al-Araibi not to travel until the Red Notice was revoked, Goodwin-Gill said.

Interpol should exercise more oversight and review the circumstances of cases with a political element, he said.

It was not clear whether Australia had informed Bahrain that al-Araibi was flying, although Bahrain requested the Red Notice on the same day that al-Araibi received his Thai visa, Goodwin-Gill said.

Foster called for an investigation of Interpol.

"This concept of countries using the Red Notice in order to try to refoul people that they want to return for nefarious reasons has to now become a very serious issue and it is something that we'll be taking up in the coming months," Foster said.