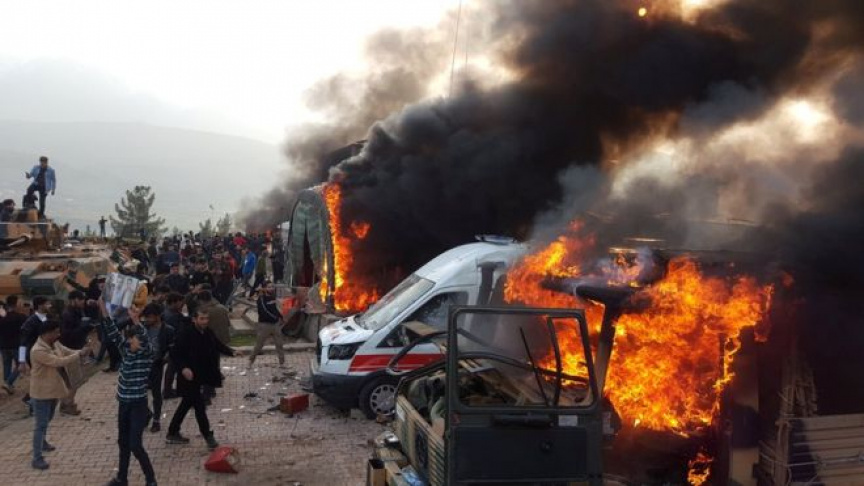 IRBIL, Iraq (AP) — Angry protesters stormed a Turkish military base in northern Iraq on Saturday, burning Turkish military vehicles and leading to a confrontation that left one teenager killed and 10 injured, according to officials in Iraq's semi-autonomous Kurdish region.

The protesters were demonstrating against a recent Turkish air raid that killed six civilians, the officials said.

A video obtained by The Associated Press showed a crowd of protesters who appeared to be mostly in their 20s inside the base in the town of Shaladze. Some tried to smash the door of what appeared to be a warehouse at the base with a rock while another tried to destroy a Turkish tank with a hammer. Fire and smoke could be seen rising from military vehicles.

A statement by the Kurdish Regional Government, or KRG, expressed regret for the loss of life and extended sympathy to the families of the victims. The statement said it will investigate the incident and punish those behind the chaos and sabotage.

Turkey's Defense Ministry said that a Turkish military base in northern Iraq came under attack by Kurdish militants and that some vehicles and equipment were damaged. In a tweet, the ministry blamed the attack on a "provocation" by the Kurdistan Workers' Party or PKK. The far-left group is considered a terror organization by Turkey and its NATO allies.

The PKK has waged an insurgency within Turkey since 1984 and is based in camps in northern Iraq near the Turkish border. Tens of thousands of people have died in the conflict, which resumed in 2015 after a fragile two-year cease-fire.

Eyewitnesses said Hassan Rekan Hussein, a 13-year-old from Shaladze, was killed in the incident Saturday, and 10 were injured. They were shot at by the Turkish soldiers at the beginning of as protesters broke into the base, the eyewitnesses said.

Vyan Sabri, a lawmaker who heads the bloc representing the Kurdistan Democratic Party, or PYD, in the Iraqi Parliament, blamed the PKK for "exploiting" Saturday's peaceful protest.

She called on the PKK to end its "illegitimate" presence in the region and on Turkey to cease its airstrikes.

"We do not have any office or representative in Shaladze," he said. He added that the demonstration was an angry reaction to the Turkish killing of civilians.

Turkish jets regularly bomb the camps and Turkey has a military presence in Iraq as part of a mandate that allows it to fight security threats in Iraq and Syria. The incident, the first of its kind, poses an embarrassment to Kurdistan's regional government, which is allied with Turkey.

The PKK is believed to have fighters near villages inside the Kurdistan region, mainly in the mountainous areas near the Turkish border.

Also on Saturday, Turkey resumed flights to the Iraqi city of Sulaimaniyah for the first time after a 16-month boycott, the director-general of Iraq's Civil Aviation Authority said.

US combat mission in Iraq to conclude by year end