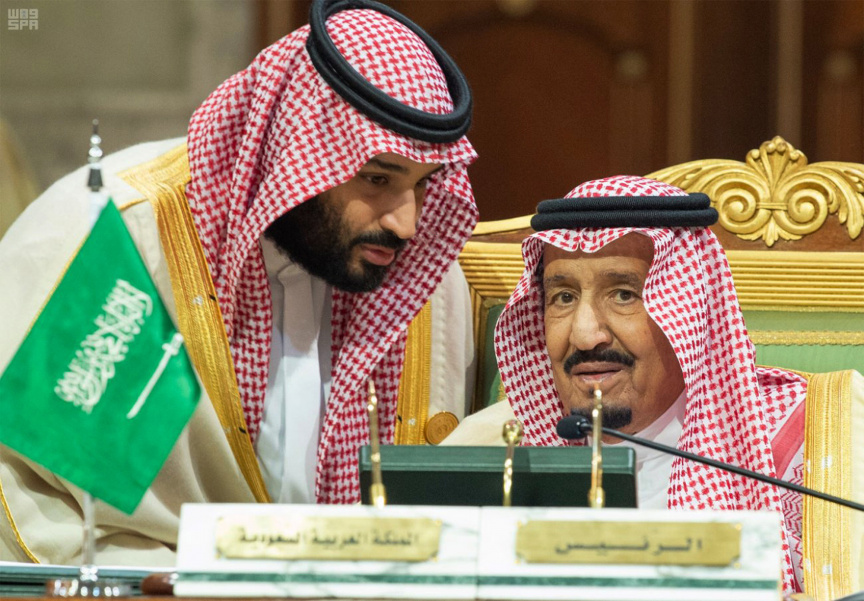 In this photo released by the state-run Saudi Press Agency, Saudi Crown Prince Mohammed bin Salman, left, speaks to his father, King Salman, right, at a meeting of the Gulf Cooperation Council in Riyadh, Saudi Arabia, Sunday, Dec. 9, 2018. Leaders of Gulf Arab countries, including those boycotting Qatar, met on Sunday in Saudi Arabia's capital for a regional summit, a gathering that Qatar's ruling emir choose not to attend amid the dispute. (Saudi Press Agency via AP)

DUBAI, United Arab Emirates (AP) — Leaders of Gulf Arab countries, including those boycotting Qatar, met on Sunday in Saudi Arabia's capital for a regional summit, a gathering that Qatar's ruling emir choose not to attend amid the dispute.

Despite mediation efforts by Kuwait, the gap remains between others in the six-nation GCC, an alliance formed in 1981 in part to offer a counterbalance to Iran, and Qatar — countries that are all American allies. The United States, which under President Donald Trump withdrew from the Iran nuclear deal, also has been unable to mend relations even as it wants a unified front for its high-pressure campaign targeting Tehran.

Saudi King Salman greeted GCC leaders Sunday as they descended down a golden escalator at a Riyadh air base and never mentioned Qatar in his remarks to the summit. The king instead spoke about the need to counter Iran, as well as the kingdom's ongoing war in Yemen.

"Extremist and terrorist powers continue to threaten our security in the Gulf and in the Arab world," the king said. "The Iranian regime is continuing its hostile policies and continues to intervene in other nations' internal affairs."

Iran's Foreign Minister Mohammad Javad Zarif later tweeted that the "region has had far too many strongmen who have only caused war & misery."

"What we need is a stronger REGION rather than strongmen," Zarif wrote, apparently in response to the GCC meeting.

King Salman's son, Crown Prince Mohammed bin Salman, sat prominently behind his father during the summit. His high-profile appearance came despite him being linked to the slaying and dismembering of Washington Post columnist Jamal Khashoggi at the hands of Saudi agents in October in Istanbul.

"The most serious challenge we are facing is the Gulf dispute and its continuation which is now causing a serious threat to our unity and affecting our citizens' interests," Sheikh Sabah said. "This has also caused the rest of the world to look at us as an entity with cracks forming in its unity, and that we can no longer guarantee the interests of other nations as we could when our unity was stronger."

Bahrain's Foreign Minister Khalid Al Khalifa tweeted that Sheikh Tamim should have "been there at the summit."

They say the crisis stems from Qatar's support for extremist groups in the region, charges denied by Doha. The four nations also have pointed to Qatar's close relationship with Iran. Qatar restored full diplomatic ties to Iran amid the dispute.

Qatar's natural gas reserves have made the Arabian Peninsula country fantastically wealthy, sparking its successful bid for the 2022 FIFA World Cup. Qatar also hosts the al-Udeid Air Base, the home of the forward headquarters of the U.S. military's Central Command and about 10,000 U.S. troops.

"GCC unity's been a really important pillar for U.S. engagement with this region, with the Gulf, with the Middle East. We'd like to see that unity restored," he said on the sideline of a security summit on Yemen in Abu Dhabi on Sunday.

"It's important not only for the GCC to be a strong bulwark against Iranian influence in the Arabian Peninsula but also to allow us to capitalize on economic linkages that can add development to the region and that can help the countries bind together," he said.