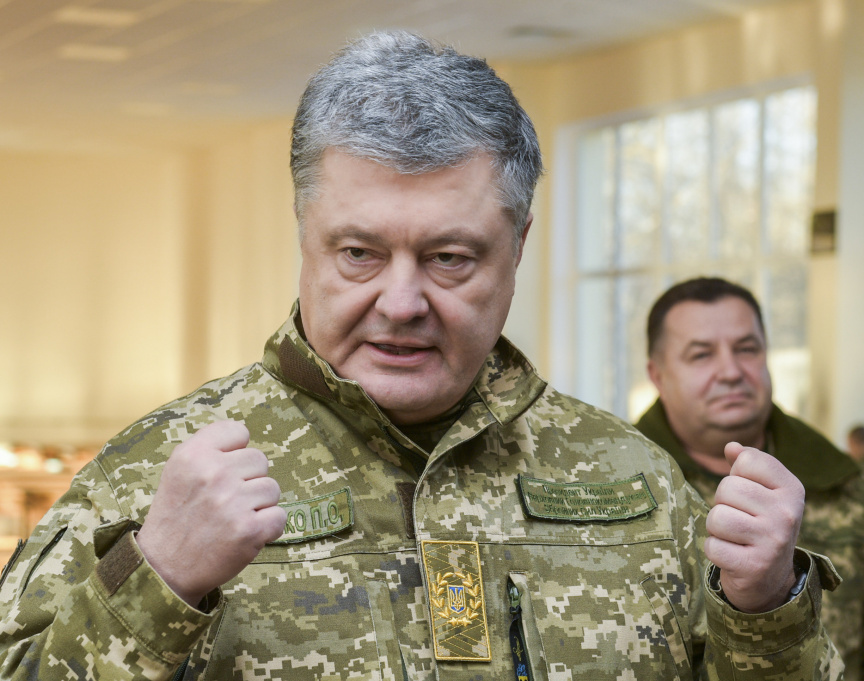 KIEV, Ukraine (AP) — Ukraine's president donned combat fatigues to implement martial law in much of the country on Wednesday, a move Russia denounced as a cynical political trick as both sides ratcheted up tensions after a weekend standoff in the Black Sea.

Each side blamed the other for the bellicose turn of events, with Ukraine saying Russia is preparing for a full-scale invasion and Moscow calling it a political stunt by an unpopular president facing tough elections.

In Sunday's confrontation, three Ukrainian naval vessels were heading from the Black Sea into the Sea of Azov when they were blocked by the Russian coast guard near the Kerch Strait between Russia's mainland and the Crimean Peninsula it annexed from Ukraine. After many tense hours of maneuvering, the Russians opened fire and seized the Ukrainian vessels and crew.

Ukrainian President Petro Poroshenko responded by ordering martial law in much of the country, a move that went into effect with parliamentary approval.

Poroshenko toured a military training center Wednesday in the Chernihiv region bordering Russia, one of the areas where martial law was imposed. Speaking to reporters as smoke billowed from a nearby shooting range, the camouflage-clad president pledged "not to allow the enemy to attack Ukraine" and announced a hike in salaries for servicemen.

Poroshenko initially sought to impose martial law for two months, a move that would have meant presidential elections scheduled for March would have to be scrapped due to election rules. Facing criticism in parliament, he halved the martial law time frame to a month, which would allow the election to go ahead as planned.

In Moscow, Russian President Vladimir Putin bluntly accused his Ukrainian counterpart of provoking the naval incident in order to shore up his sagging popularity and sideline competitors ahead of the March election.

"The Black Sea incident certainly was a provocation organized by the sitting government, including the incumbent president ahead of the presidential vote in March," Putin said, alleging that Poroshenko wanted to "exacerbate the situation and create obstacles for his rivals."

Ukraine has insisted that its vessels were operating in line with international maritime rules, while Russia claimed they had failed to get permission to pass through a Russia-controlled area. A 2003 treaty between the two countries designated the Kerch Strait and the Sea of Azov as shared territorial waters, but Russia claimed the strait in its entirety after annexing Crimea in 2014 and has sought to assert greater control over the passage.

On Wednesday, Ukraine released what it said was the exact location where its ships were fired on by Russia, saying they were in international waters west of the Kerch Strait. Putin, meanwhile, insisted the Ukrainian vessels were in Russia's territorial waters and refused to communicate with the Russian coast guard or accept a Russian pilot to guide them through the narrow strait.

"What were the border guards supposed to do?" the Russian leader said Wednesday. "They fulfilled their duty to protect the territorial integrity of the Russian Federation. If they had done something differently, they should have been put on trial for that."

Kurt Volker, the U.S. special envoy on Ukraine, told reporters in Berlin that Washington sees no reason to doubt the information from Kiev that its vessels were operating in line with international maritime rules. "There's no conceivable justification that we can think of for the use of force in this scenario," he said.

Ukraine, which insists its seamen are prisoners of war, has asked the International Red Cross to arrange a visit to see them. It said six of the sailors were wounded by Russian fire, while Russia said three Ukrainian crewmen were slightly injured.

A court in Crimea's regional capital, Simferopol, has ordered all 24 Ukrainian crewmen to be held in custody for two months on charges of violating the Russian border pending trial. They face up to six years in prison if convicted.

The incident marked the first overt collision between Russian and Ukrainian militaries since the 1991 collapse of the Soviet Union. It has fueled fears of a wider conflict and has drawn strong criticism of Russia by the U.S. and its allies.

U.S. President Donald Trump, in an interview with The Washington Post on Tuesday, said he might cancel a sit-down with Putin during the G20 summit in Argentina over the Russian action. Kremlin spokesman Dmitry Peskov told reporters on Wednesday that the meeting is on and that Russia has not received "any other information from our U.S. counterparts."

Amid the tensions, the Russian military announced Wednesday that it would beef up its forces in Crimea with another batch of the long-range S-400 air defense missile systems to Crimea.

The showdown came amid the long-simmering conflict between the two countries, in which Russia annexed Ukraine's Crimean Peninsula in 2014 and supported separatists in Ukraine's east with clandestine dispatches of troops and weapons. That fighting has killed at least 10,000 people since 2014 but eased somewhat with a 2015 truce.

Putin rallies behind troops as lethal fire rains down