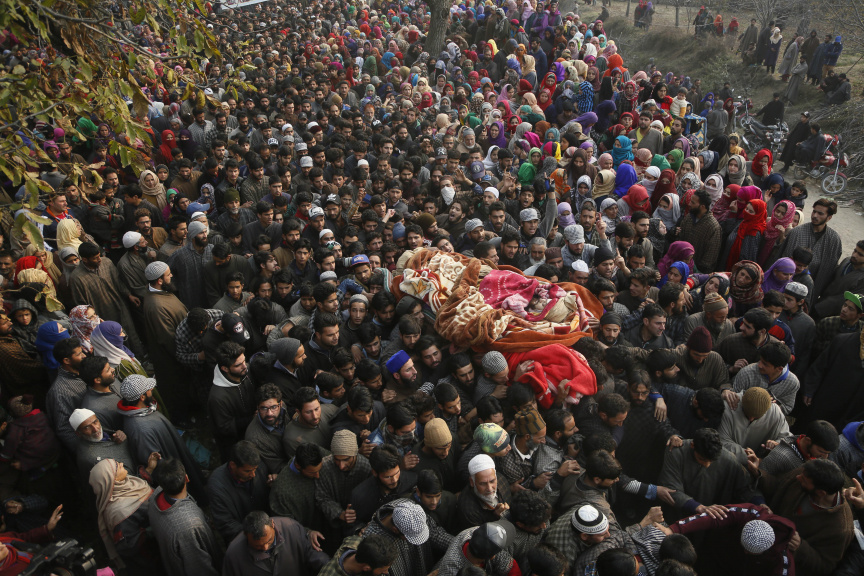 SRINAGAR, India (AP) — Assailants on Tuesday killed a prominent separatist leader in Indian-controlled Kashmir, officials and residents said, as anti-India protests and clashes followed a gunbattle that killed four rebels and an army commando in the disputed region.

Rebel groups and separatist leaders called the killing of Hafizullah Mir an assassination and blamed Indian authorities, while police said it was carried out by militants.

Mir was released from jail last month after two years of imprisonment in India.

Gunmen sprayed gunfire at Mir, a top leader of Tehreek-e-Hurriyat, a group that challenges India's sovereignty over Kashmir, at his home in the southern Achabal area. He died on the spot while his wife was wounded in the attack, police and residents said.

Tehreek-e-Hurriyat had said recently that Mir was receiving death threats over the telephone.

Fighting began early Tuesday in Kashmir after police and soldiers cordoned off a village on a tip that militants were hiding in a house, army spokesman Col. Rajesh Kalia said. He said militants ignored calls for surrender and fired at the soldiers, and in the exchange the four rebels were killed.

Police said one soldier from India's special forces unit was also killed and two soldiers were injured in the fighting.

As news of the rebels' killing spread, hundreds of villagers seeking an end to Indian rule hit the streets to show solidarity with militants, sparking clashes with government forces.

Kashmir is divided between rivals India and Pakistan and both claim the territory in its entirety.

Most Kashmiris support rebel demands that the territory be united either under Pakistani rule or as an independent country, while also participating in civilian street protests against Indian control. In recent years, mainly young Kashmiris have displayed open solidarity with the rebels and sought to protect them by engaging troops in street clashes during military operations.

Rebels have been fighting Indian control since 1989. India accuses Pakistan of arming and training the rebels, a charge Pakistan denies.

About 70,000 people have been killed in the uprising and the ensuing Indian military crackdown.