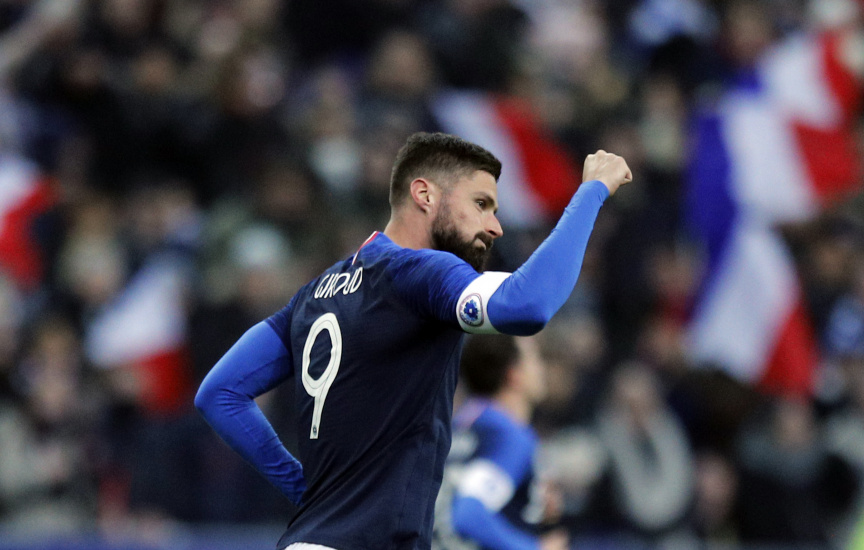 PARIS (AP) — Olivier Giroud scored from the penalty spot for France as the world champion beat Uruguay 1-0 in a friendly match on Tuesday to conclude an exceptional year with a rather mundane display.

The French bounced back from a 2-0 loss at the Netherlands that cost them a spot in the UEFA Nations League finals but failed to impress in front of their home crowd ahead of a four-month pause before the next international break in March.

The win was also marred by teenage forward Kylian Mbappe having to leave the game with a shoulder injury.

Coach Didier Deschamps, who led France to a second World Cup title this summer in Russia, had made changes at the back following the loss in Rotterdam, with Adil Rami starting at the heart of the defense alongside the returning Mamadou Sakho, who played his first international in more than two years.

Ferland Mendy won his first cap at left-back and midfielder Tanguy Ndombele started in place of Steven Nzonzi, who disappointed against the Dutch and was sent to the bench.

The French played aggressively in midfield from the start and dominated throughout against an uninspired Uruguay team that defended deep and left a lot of space for the hosts to exploit. Uruguay strikers Edinson Cavani and Luis Suarez were shut down by the French defenders but the world champions rarely threatened.

"We needed this, we finished the year on a good note after what we went through this summer," Giroud said. "We are a bit disappointed we did not qualify for the final four, but we wanted to show a good reaction and we did it."

Mbappe was at the heart of most of France's chances before his injury. He missed a good chance 15 minutes in when he collected a pass from Antoine Griezmann and broke into the box but completely fluffed his shot.

He hurt his shoulder on the half-hour mark after he failed to convert another one-one-one with Uruguay keeper Martin Campana, who dived at his feet to block the ball. Mbappe fell over after making contact with Campana and landed awkwardly on his right shoulder, forcing Deschamps to substitute him for Florian Thauvin.

France continued to push after the interval and was awarded a penalty in the 52nd minute after Martin Caceres was penalized for a handball in the box. Giroud converted his 33rd international goal with a low shot to the right of Campana.

Uruguay substitute Jonathan Rodriguez had a good chance to level with seven minutes left when Cavani picked him out unmarked in the box but he mishit his volley.

"It was not perfect, but we played far better than in our previous match," Deschamps said. "It was important to finish on a positive note."