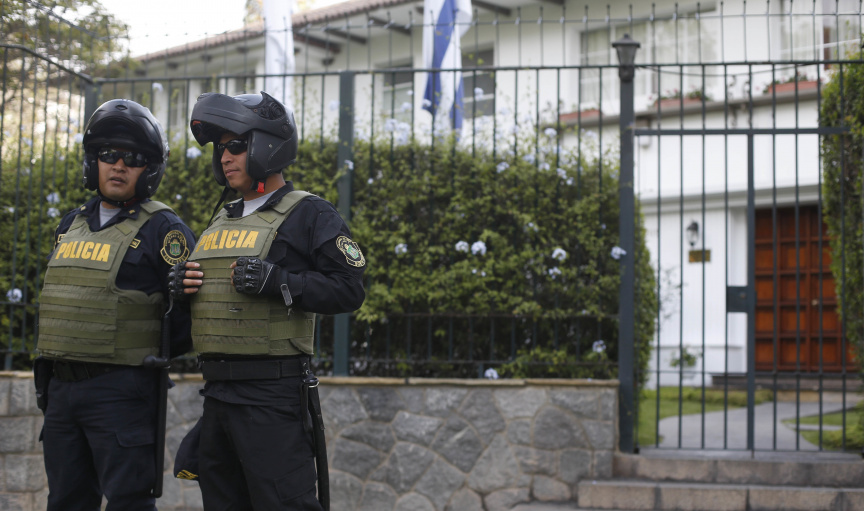 Odebrecht is at the center of Latin America's biggest corruption scandal after admitting in a 2016 plea agreement with the U.S. Justice Department that it paid corrupt officials across Latin America nearly $800 million in exchange for major infrastructure contracts.

The scandal has led to the jailing of numerous politicians across the region, especially in Peru, where former President Pedro Pablo Kucyznski was forced to resign for hiding his past work as a consultant to Odebrecht and Garcia as well as two other former presidents, Ollanta Humala and Alejandro Toledo, are being probed for allegedly taking illegal payments.

Outside the ambassador's residence in the leafy San Isidro neighborhood, a few dozen protesters shouted "Garcia, you coward, the people repudiate you" while a similarly sized group of supporters was held back by police. Inside, Garcia received visits from several family members.

President Martin Vizcarra, who has made tackling corruption the focus of his accidental administration since taking over from Kuczynski, rejected Garcia's claims the case against him was built on false testimony.

"Political persecution doesn't exist in Peru, and all of us Peruvians must obey justice, without exceptions," he wrote on Twitter shortly after news of Garcia's asylum request.

Uruguay's foreign minister said his government would study Garcia's request but refused further comment. Peru said it would provide Uruguay with unspecified information to help it in its evaluation of the asylum request.

Garcia is under investigation for bribes allegedly paid during the construction of Lima's metro during his 2006-2011 government. He downplayed the threat of arrest when he arrived home on Thursday from Madrid, where he splits his time.

"For me it's not a punishment to be confined 18 months to my homeland," he said while denying that he had ever received money from Odebrecht.

Garcia, 69, was a populist firebrand whose erratic first presidency in the 1980s was marked by hyperinflation, rampant corruption and the rise of the Shining Path guerrilla movement.

When he returned to power two decades later he ran a more conservative government, helping usher in a commodities-led investment boom in which Odebrecht played a major supporting role.

This is the second time Garcia has sought to flee to another country amid corruption charges. Following the end of his first government he spent nine years in exile in neighboring Colombia and then France after his successor, Alberto Fujimori, raided his house and reopened a corruption probe.

Argument at US hospital erupts into deadly shooting