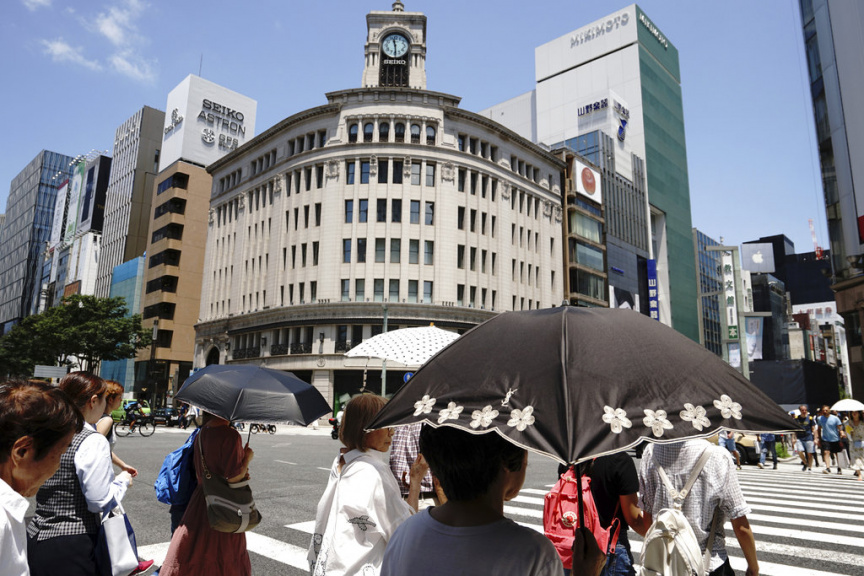 People walk under intense sun at Ginza shopping district in Tokyo Friday, July 20, 2018. A deadly heat wave in Japan has many residents in the Japanese capital questioning the wisdom of staging the Tokyo 2020 Olympics in July and August. (AP Photo/Eugene Hoshiko)

TOKYO (AP) — A deadly heat wave in Japan this week has many residents in the Japanese capital questioning the wisdom of staging the Tokyo 2020 Olympics in July and August.

Rescuers in Tokyo responded to more than 3,000 emergency calls on Wednesday as the heat wave continued to grip Japan.

The 2020 Olympics will run from July 24 to Aug. 9 when temperatures in central Tokyo can exceed 35 degrees Celsius (95 Fahrenheit).

A total of 317 people were rushed to hospitals in the capital on Wednesday. The number of emergency calls broke the previous record of 2,900 set the previous day.

Tokyo's Application File to host the 2020 Games reads: "The pleasant weather conditions at this time of year will be ideal for athletes."  But anyone who has spent a summer in Tokyo knows that's not necessarily the case.

Experts have warned the risk of heat stroke in Tokyo has escalated in recent years, while noting the Olympics are expected to take place in conditions when sports activities should normally be halted.

"If this is what it's going to be like for the Olympics, it will be dangerous," said office worker Akira Nishino as he mopped sweat from his brow near the Imperial Palace on Friday.

Nine people died and thousands were taken to hospitals across Japan on Wednesday. Temperature rose as high as 40.7C  (105F) in central Japan.

The Japan Meteorological Agency warned of extremely high temperatures and has called on people to take precautions such as drinking water and using air conditioners.

In 1964, the Olympics in Tokyo were held in October, mostly to avoid the scorching heat. But that was before the Olympics became big business and TV contracts determined schedules.

Organizers are doing what they can but there is only so much that can be done in an attempt to beat the heat.

During a visit to Tokyo last week, John Coates, the head of an IOC inspection team, acknowledged that heat will be a huge challenge for Tokyo organizers.

"We are mindful that we do have to prepare for extreme heat," Coates said at a news conference. "You're not the first country to host the games in extreme heat. It's a natural consequence of being in July and August."

Coates said organizers should explore all options to combat the extreme heat that will likely prevail during the games.

The marathon and a number of other outside sport events will be held early in the morning to avoid scorching heat, a plan approved by the IOC on Wednesday showed.

The Japanese government and the Tokyo metropolitan government are planning to lay pavements that emit less surface heat and plant taller roadside trees but many worry it won't be enough.

Meanwhile Coates has urged Tokyo organizers to rely more heavily on foreign expertise in staging events where Japan does not have a strong background.

Tokyo organizers have been criticized by various sports federations over issues such as competition planning, water pollution and communication channels.

Some federations — including sailing — have raised concerns about Japan's ability to deliver their events to an Olympic standard.

"The federations are not going to have to worry too much about karate or judo or baseball or softball -- track and field, great experience there, swimming too -- but you go to rowing, canoeing, some of those sports, and it is going to need greater reliance on the international federations, in terms of operational planning," Kyodo News agency quoted Coates as saying on Friday.