The next senior World Cup is in France, not Qatar 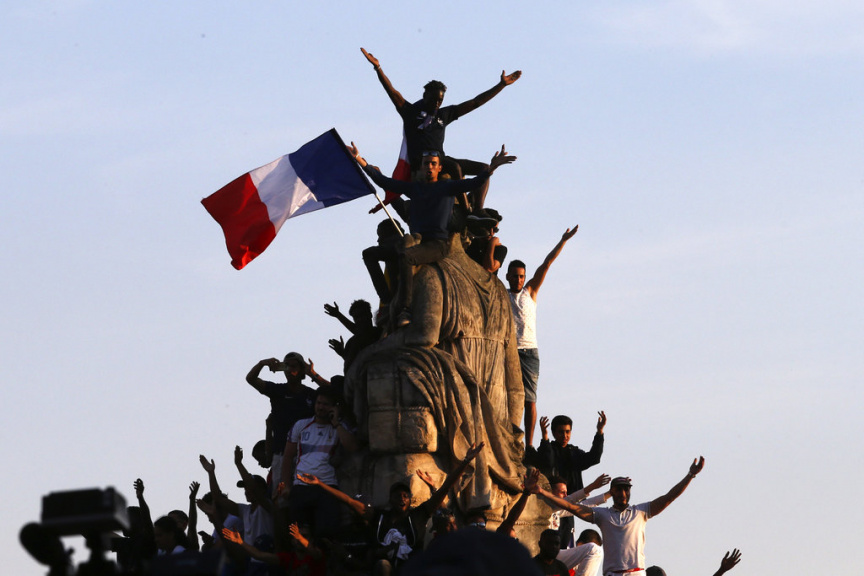 People wait on the Place de la Concorde for the French soccer team Monday, July 16, 2018 in Paris. Following a victory lap down the packed Champs-Elysees Avenue in an open air bus, the squad that defeated Croatia 4-2 in the tournament final on Sunday attended an informal garden party hosted by President Emmanuel Macron. (AP Photo/Bob Edme)

MOSCOW (AP) — The "next" World Cup got plenty of hype in Russia. A massive cube was alight with video images of "Qatar 2022" in Gorky Park, while the ground floor of the high-end shopping mall at Red Square was devoted to displays touting the event.

But apart from a social media campaign, there was little attention on the (actual) next senior World Cup: the women's tournament next year in France.

In the past several years since scandal enveloped soccer's governing body, FIFA has made a point of proclaiming that it aims to raise both the role of women in the organization and the profile of the women's game. President Gianni Infantino appointed Fatma Samoura as the first female secretary general of soccer's international governing body in 2016, while also announcing the creation of a women's soccer division.

The men's World Cup in Russia could have provided an opportunity to address equity in the sport while also pointing to the women's tournament next year. But France 2019 wasn't promoted much at all: No signs, events or displays in tourist areas.

Samoura made some appearances, but was not visible during the awards ceremony following France's victory over Croatia on Sunday.

Venezuelan forward Deyna Castellanos was deemed the women's soccer ambassador in Russia and she starred in a social media campaign anchored by the hashtag #DareToShine. But while the 19-year-old is considered a rising star in the women's game, Venezuela failed to qualify for France so the selection seemed odd.

Infantino acknowledged more could be done for the women's game at his wrap-up news conference in Moscow. There's no doubt that the men's World Cup every four years is FIFA's financial juggernaut. But the women are the governing body's second-biggest commercial asset.

The call for greater equity in soccer is not new.

In the run-up to the last Women's World Cup in 2015, a group of international players, led by U.S. star Abby Wambach, protested because the tournament would be played on artificial turf, which is considered by many to be inferior to real grass. The men's tournament had always been played on grass.

Once the point was made about the turf, the tournament in Canada turned out to be a rousing success, attracting the biggest crowds of any FIFA tournament outside of a men's World Cup. It also broke TV rating records in North America, with the final drawing more viewers than any other prior men's or women's match in the United States.

Following their victory over Japan for the trophy, the U.S. women went on to bargain for, and receive, a better contract with U.S. Soccer that brought them closer to the compensation level of their male counterparts. The Americans were not alone, national teams from other countries won more equitable contracts with their federations, including Australia and Ireland.

France could provide FIFA an opportunity to showcase concrete change at the highest level, and the possible messaging couldn't get more perfect: France won a World Cup, and now will host it.

Two issues stand out. It remains to be seen how much prize money will be increased in 2019. The U.S. women took home $2 million in 2015. In contrast, France's men earned $38 million for their victory on Sunday.

And there's no word yet whether video replay will be used just as it was for the men for the first time in Russia.

U.S. women's coach Jill Ellis was in Moscow the final week of the tournament for an appearance on FOX, which has the domestic TV rights for 2019 France. She'd like to see an increase in prize money and the use of replay.

"I don't know what the ramifications were in other countries, but you look at our own team, in our own country and the viewership and the attendance — there's no difference (with the men)," Ellis said. "So I think that FIFA 100 percent should look at our game as a game, not as a women's game or a men's game."