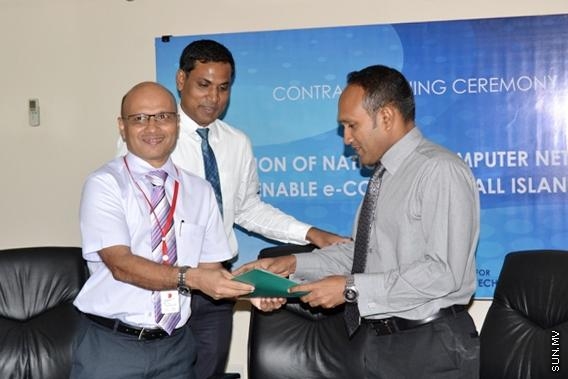 An agreement has been signed between the Local Government Authority (LGA) and the National Centre for Information Technology (NCIT), to develop a MVR16-million project to connect Island Councils through a computer network.

The purpose of the national network is to strengthen the operation of Councils through information communication, facilitate the provision of public services at the island level, and facilitate the conveyance of information between islands and government institutions.

The agreement was signed at a ceremony held at NCIT today.

Minister of Transport and Communications Minister Dr Ahmed Shamheed informed that the agreement signed today facilitates the provision of this service in 100 islands via Dhiraagu, and that an agreement will be signed within the week with Wataniya as well.

Minister of Home Affairs Dr Mohamed Jameel Ahmed said while speaking at today’s ceremony that by the end of this project, 209 Councils will be connected via this network.

Chief Executive of Dhiraagu Ismail Rasheed said that out of the 100 islands included in this project, Dhiraagu hopes to commence services in 50 islands by the end of the year.

“Our co-network has been upgraded through a submarine cable. We will use the submarine cable to provide this service, and things have already been accordingly arranged to facilitate this all over Maldives. This service will be provided in small islands via radio. We will begin that shortly as well, and we assure that we will deliver on time,” he said.

An official of NCIT said that the new system would improve the provision of public services under the decentralisation system, and help the government overcome the current challenges faced in this regard.