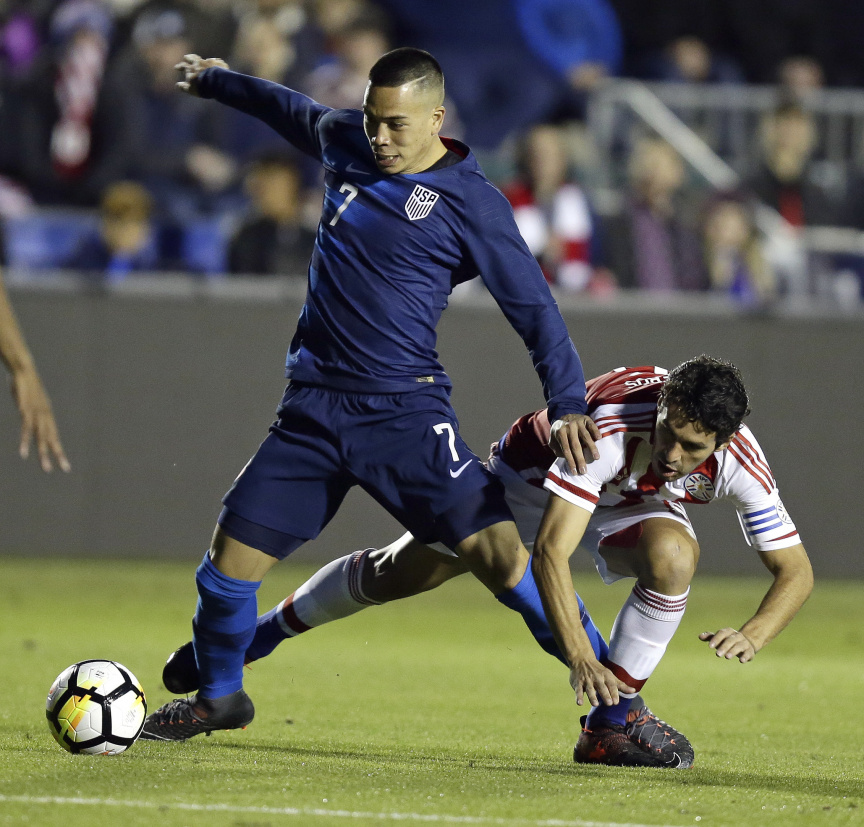 CARY, N.C. (AP) — Tim Weah ran onto the field wearing bright orange boots, the first player born in the 2000s to play for the United States.

"This is what I've been waiting for my whole life," said the 18-year-old, the son of Liberian President George Weah, the 1995 FIFA Player of the Year. "I'm really appreciative of the chance that the coaching staff has given me, and I'm hoping that I get more call-ups."

Weah debuted in the 86th minute, Bobby Wood scored on a penalty kick and the U.S. beat Paraguay 1-0 in an exhibition Tuesday night for its first win in three games under interim coach Dave Sarachan.

Weah entered in the 86th minute and was pulled down three minutes later by Derlin Gonzalez. Weah made his debut for Paris Saint-Germain on March 3, less than two weeks after his birthday. He played alongside American midfielder Darlington Nagbe, whose father Joe was Liberia's captain and a teammate of George Weah on the national team.

Midfielder Marky Delgado and forward Andrija Novakovich — whose family drove 16 hours from Wisconsin for the game — also made their U.S. debuts. Sarachan has given three players debuts in each game since taking over for Bruce Arena, who quit in November after the U.S. failed to qualify for the World Cup.

Sarachan praised his young players for winning a "a real big-boy game" that included seven yellow cards — five for Paraguay.

"All the guys that came in had a great experience of being a part of the national team throughout the nine days," Sarachan said. "You don't just make changes for change's sake. We did want to make at least 3-4 subs, and could have been six, but that game sort of evolved in a way where we felt like the players on the field needed to be rewarded for a great effort."

Delgado's 50-yard pass led to the foul that resulted in the 45th-minute penalty kick.

Jorge Villafana won Bruno Valdez's throw-in deep in the U.S. end and headed the ball to Tyler Adams, a 19-year-old midfielder making his third international appearance. Adams squared to Delgado before taking off and reached Delgado's pass about 30 yards from goal. Adams rounded goalkeeper Roberto Fernandez, who tripped him with an outstretched arm.

"With my pace . I was able to go at the goalkeeper, and he took a good angle on the initial shot," Adams said. "I was going to try to tuck it back post, so I tried to drag it across my body, and the keeper caught me. And Bobby just stepped up and buried it."

Wood, making his first start since Feb. 10, for Hamburg against Borussia Dortmund, coaxed Fernandez into diving right while his penalty kick went left for his 11th international goal. Novakovich, who has 18 goals this season for Telstar in the Dutch second tier, replaced Wood in the 77th minute and missed a chance to score in stoppage time when his point-blank shot went into Fernandez' chest.

Sarachan is likely to add some veterans when the U.S. gathers in late May for exhibitions against Bolivia, Ireland and France. The Americans won't play a competitive match until the 2019 CONCACAF Gold Cup, and a new coach may not be hired until after this summer's World Cup.

The U.S. debuted new uniforms with blue horizontal stripes — which would have been its road set during the World Cup.

Zack Steffen started in goal after making his debut in the second half of a January exhibition against Bosnia-Herzegovina that ended 0-0.

Kenny Saief, playing for the first time since his debut last June, had a chance in the 16th minute when his 8-yard shot was deflected by Bruno Valdez with a slide tackle and cleared by Gustavo Gomez.

Paraguay, which is missing its second straight World Cup after four consecutive appearances, had a prime scoring chance in the 68th minute. Atlanta midfielder Miguel Almiron missed wide in the 68th minute and Hernan Perez was just off the target with a header in the 75th minute.