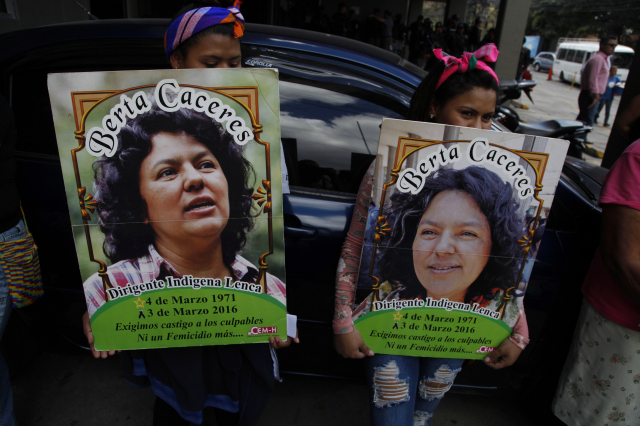 TEGUCIGALPA, Honduras (AP) — Honduran authorities arrested an executive with a dam development company Friday in the 2016 killing of indigenous and environmental activist Berta Caceres, calling him an intellectual author of a crime that sparked an international outcry.

Roberto David Castillo Mejia, who at the time of the slaying was executive president of the company Desarrollos Energeticos SA, or DESA, was detained at an airport in San Pedro Sula as he was about to fly to Houston, Texas, said Jorge Galindo, a spokesman for the prosecutors' office.

It was the ninth arrest in the killing of Caceres, a Goldman Environmental Prize winner who was shot to death two years ago after attackers barged into her home in La Esperanza. Castillo is charged with being an "intellectual author" in the crime, which generally applies to someone alleged to have been involved in a crime but not at the scene.

Two others have been arrested for allegedly impeding the investigation.

The Public Ministry alleges Castillo was "the person in charge of providing logistics and other resources to one of the material authors already being prosecuted for the crime."

In a statement, DESA defended Castillo and its employees as innocent, saying they were "totally unconnected" to the crime and calling the "unjust detention" the result of "international pressure and campaigns by diverse NGOs to discredit the company."

DESA questioned the coincidence that the arrest came on the second anniversary of Caceres' killing as her supporters held a protest in Honduran capital of Tegucigalpa.

Roberto David Castillo is taken into custody by the police as he is walked to the Technical Investigation Agency in Tegucigalpa, Honduras, Friday, March 2, 2018. (AP Photo/Fernando Antonio)

Caceres' relatives said they were certain of Castillo's guilt.

"There is no doubt that he was one of the material authors of Berta's death," said her ex-husband, Salvador Zuniga.

"The owners of DESA killed my mother," said Caceres' daughter Olivia Zuniga Caceres, who is now a lawmaker with the Liberty and Refoundation Party.

She said she was promoting a parliamentary initiative to cancel the construction of the Agua Zarca dam.

Caceres and her organization known as Copinh opposed DESA's Agua Zarca hydroelectric project, which is on her Lenca indigenous people's lands. She was recognized with the prestigious Goldman award for her activism in 2015.

Last October, an international team of lawyers issued a report saying her killing was the product of a coordinated plot four months in the making involving company employees, state and private security forces, and officials.

Based on an outside review conducted at the request of Copinh and Caceres' family, the report suggested that dam company leadership ordered her assassination and concluded it was "not an isolated incident."

Honduras is the deadliest country on the planet per capita for land defenders, according to the London-based watchdog Global Witness.

The group said in a report last July that 14 were killed there in 2016, including two other members of Copinh.

Italians to vote but no end in sight for political tensions