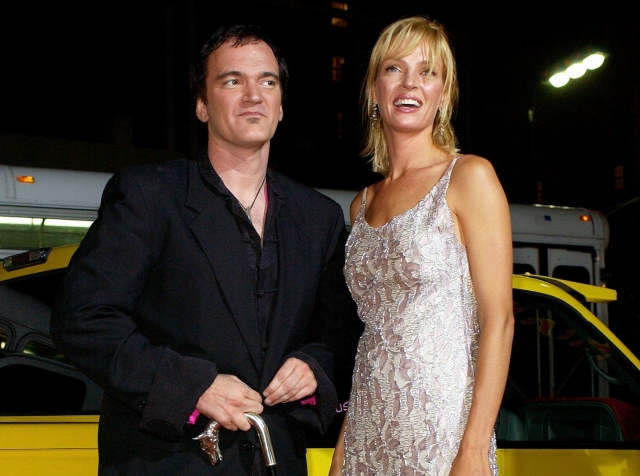 NEW YORK (AP) — Director Quentin Tarantino has responded to Uma Thurman's allegation that he put her life in danger with a dangerous car stunt on "Kill Bill," calling the incident "the biggest regret of my life."

But just as he was making amends for that incident — and trying to explain it — the director was being excoriated on social media Tuesday for remarks he made in a 2003 interview with Howard Stern that resurfaced online, seemingly defending Roman Polanski for having sex with a 13-year-old girl, saying the victim "wanted to have it" and was "down to party" with Polanski.

The incident involving Thurman became public on Saturday, in a New York Times column in which the actress, while also making sexual misconduct allegations against Harvey Weinstein, recounted Tarantino's persuading her to drive a car on the Mexico set that she had been warned might be faulty.

Thurman told columnist Maureen Dowd that she'd expressed fear beforehand, and asked that a stunt driver do it instead. An irritated Tarantino convinced her to do it, she said, and she crashed into a tree, suffering what she said was permanent neck damage, a concussion and damage to her knees. Video that Thurman provided the Times — provided to her by Tarantino himself — shows her struggling to control the car before crashing, and then being lifted out of the vehicle.

In an interview with Deadline published Monday, Tarantino disputed some of the details in the Times account but said he had indeed persuaded Thurman to drive the car, although not as angrily as described. He said he had driven the road himself and it had seemed totally straight, but that a decision was made for Thurman to drive it in the other direction, and somehow there was a turn that he didn't expect.

"I didn't force her into the car," he told Deadline. "She got into it because she trusted me. And she believed me." He said seeing the crash was "just horrible ... It was heartbreaking." He called it "the biggest regret of my life."

A representative for Tarantino has not responded to two requests for comment from the Associated Press.

Thurman spoke out again Monday on Instagram, reposting the crash video and acknowledging that Tarantino "was deeply regretful and remains remorseful about this sorry event, and gave me the footage years later so I could expose it and let it see the light of day ... I am proud of him for doing the right thing and for his courage." She said she held the film's producers and "the notorious Harvey Weinstein" responsible for covering up and refusing to give her the video for years. "They lied, destroyed evidence, and continue to lie about the permanent harm they caused and then chose to suppress," the actress wrote.

It wasn't just the car incident that called Tarantino's behavior into question; Thurman also said the director himself both spit on her and choked her during scenes where it was called for in the script. Tarantino explained to Deadline that he spit on Thurman himself because he felt he could do accomplish it more efficiently than actor Michael Madsen, and that it was Thurman's idea that he choke her. "I can act all strangle-ey, but if you want my face to get red and the tears to come to my eye, then you kind of need to choke me," Tarantino explained.

The director was also getting severely criticized on Twitter on Tuesday as audio surfaced of his remarks concerning Polanski, 84, who has been a fugitive since fleeing to France in 1978 while awaiting sentencing for unlawful sex with a minor in 1975.

"She wanted to have it and dated the guy," Tarantino says in the audio interview. When Stern and his co-host, Robin Quivers, protest, Tarantino replies, "Look, she was down with this."

Some were noting on Tuesday that Polanski will figure as a significant character in Tarantino's upcoming film about the Manson murders, slated to coincide with the 50th anniversary of the murders next year. Sharon Tate, who was killed, was married to Polanski.

Polanski pleaded guilty to having unlawful sex with the girl, Samantha Geimer, when she was 13. She has said he drugged, raped and sodomized her. The Associated Press does not typically name victims of sex abuse, but Geimer went public years ago.

John Mahoney, who played cranky dad on 'Frasier,' dies at 77