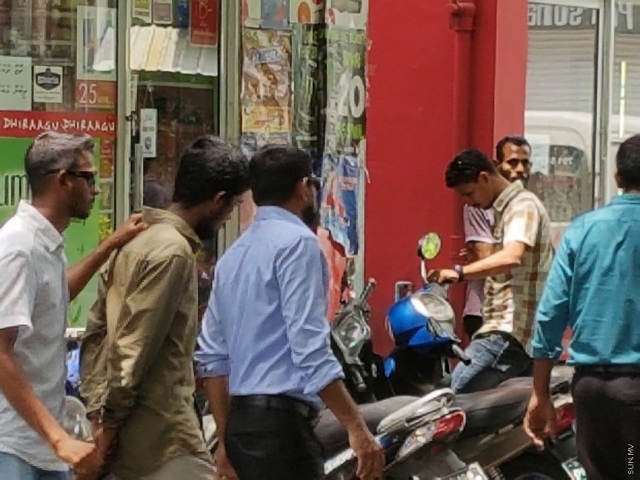 A young man has been apprehended by the police in connection with the murder of human rights activist and blogger, Yamin Rasheed.

“Sun” has confirmed the identity of the suspect as Mohamed Dhifran, 18, from G. Dh. Gadhdhoo.

Dhifran was arrested at dawn this this Monday. And the arrest was reported to the family at approximately 11 am.

Police, in the afternoon, closed off a large section of the Bisburu area of Maafannu district and took Dhifran back to his residence M. Afsana for a court-ordered search of the house.

M. Afsana is located in the same neighborhood as M. Spatula – where Yamin, 29, was discovered stabbed in the early hours of April 23.

Yamin had died minutes after he was taken to the hospital.

Police confiscated several items as evidence, including a cap in the operation.

The whole operation; including the search, Dhifran’s reactions and the reaction bystanders was closely videoed by the police – the general protocol for high-priority cases.

Officers involved in the operation included detectives who have worked in several high-profile homicide cases.

“Sun” was informed by Spokesperson for Maldives Police Service, Superintendent of Police Ahmed Shifan that the police will not be making any comment regarding the operation at the moment.

Dhifran’s mother arrived on a taxi just as Dhifran was taken back to jail by the police. She was seen weeping by reporters at the scene.

“Sun” spoke to some of the family members who described Dhifran as well-mannered and religious.

“We had been looking for his since dawn when the police called and informed us he was arrested. He usually attends the dawn prayer. And he regularly performs Sunnah prayers as well,” said a family member.

Dhifran has a record for drug-related offenses. He is a recovering drug-addict enrolled in a rehabilitation program.