One-week into Yamin’s murder: Where are the killers? 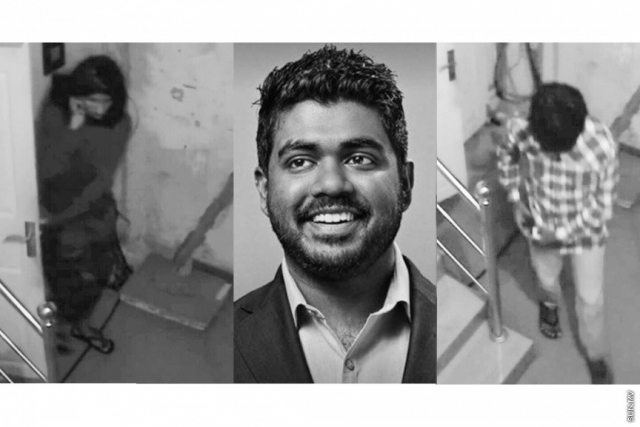 People of Maldives woke up on Sunday of last week, April 23, to terrible news; leading young human rights activist and blogger Yamin Rasheed was attacked on the stairwell of his own residence. Stabbed dozens of times and left bleeding. He died moments after he was discovered and taken to the hospital.

Today marks one week into the brutal murder.

The people of Maldives remain reeling in shock and fear, and left with unanswered questions.

Maldives Police Service held a press conference two days after the murder and announced that they have two suspects who were directly involved in murdering Yamin on tape.

The police released stills from blurry CCTV footage and asked for the public’s assistance in identifying and apprehending the two men.

Police have remained silent since then, and have not released any information regarding any arrest or any progress in the murder investigation.

The public have questioned whether the police investigation can provide any justice to Yamin and his family.

The high-profile murder of politician and religious scholar Dr. Afrasheem Ali in 2012 and the abduction of journalist Ahmed Rilwan in 2014 remains unsolved. And it’s now Rilwan’s friend

Yamin, who never stopped in his search for justice for Rilwan, who has become the latest victim of brutality.

Minister of Home Affairs, Azleen Ahmed has condemned Yamin’s murder, vowing that the culprits will be brought before the law and punished for their crime. He vowed to seek international involvement if necessary to make it possible.

Yameen Abdul Gayoom himself for international involvement in order to ensure an impartial and reliable investigation into the case.

The police have made no comment regarding the family’s appeal.

In his statement after speaking to foreign diplomats, human rights advocates and journalists based in Colombo, Sri Lanka, Yamin’s father Hussain Rasheed questioned the reliability of the investigation into Yamin’s murder and reiterated his appeal for international involvement.

“I remind the need for authorities – especially the police – of the importance of speed in order to find justice in my son’s murder case,” said Hussain Rasheed in his statement.

The United Nations has appealed to the Maldivian government for a fair and impartial investigation into Yamin’s murder. And the UN Resident Coordinator to Maldives, Shoko Noda met with senior officials from Maldives Police Service last Thursday, April 27.

Yamin had been someone who fully exercised his right to freedom of speech. This made him a target for threats and “hate messages” some of which was delivered to him directly to his personal mobile phone through phone calls and texts.

Many of threats came from people whose political and religious ideologies conflicted with Yamin’s.

Yamin was threatened that he would be “erased” from earth the same way his friend Rilwan was “erased”.

The threats Yamin received were reported to the police, and Yamin had alleged in his posts that the police failed to take any action in any of the cases stretching as far back as 2014.

Spokesperson for Maldives Police Service, Chief Superintendent Ahmed Shifan denied that the reports filed had gone unattended. Shifan said that the police had investigated the cases and questioned suspects and reported the progress back to Yamin.

One week into the murder, Yamin’s family, friends, and the general public await any news from Maldives Police Service regarding the case; the identities of the killers, and where are they - are they still in the country? or have they already fled abroad?

Siyam: Hoarafushi will have an airport by end of 2018