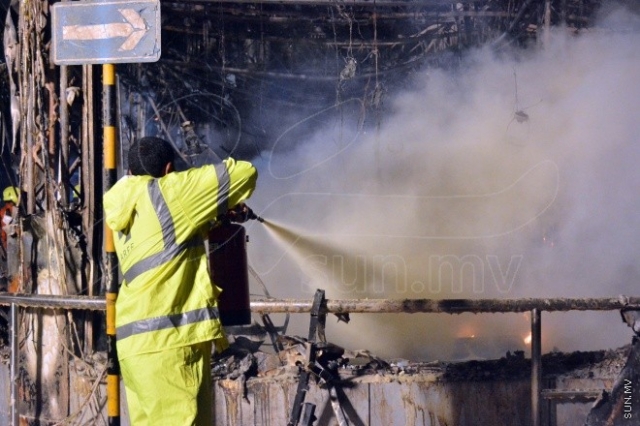 Maldives National Defense Force (MNDF) has said that they faced difficulty in controlling the huge fire that originated from Coastline Hardware on Monday evening due to failure of hydrant systems installed in Male’.

MNDF Fire and Rescue Commander, Colonel Abdulla Zuhury said that the hydrant systems had not worked when they turned to it to control the fire.

He said that the failure of hydrant systems meant they had to get water from Ransfannu and the ocean, and that having to take water from so far away meant they were not able to get the water pressure they wanted.

He said that the biggest priority of MNDF on Monday had been to put out the fire at the warehouse and stop the fire from spreading any further.

“The houses that were burning in the back – we were trying to put out the fires that had spread to houses at the back – to save civilians and prevent the fire from spreading anywhere else.

Experts have said that the foam fire engine should have been able to easily control the fire despite the amount of chemicals stored in the building that caught fire. But the fire had been more or less in control when it was finally brought to Male’.

Zuhury said that MNDF had materials and equipment needed to control fires, including foam. And that the MACL foam fire engine was brought as a backup.