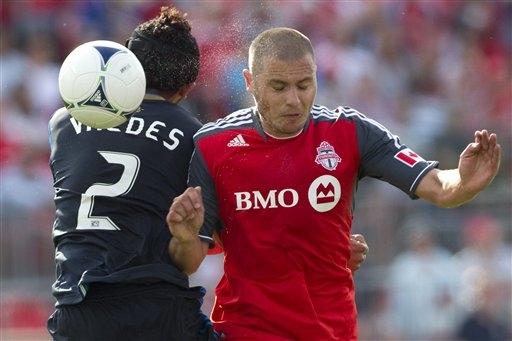 TORONTO (AP) — Toronto FC ended its MLS record nine-game losing streak to open a season with a 1-0 win over the Philadelphia Union on a late goal by Danny Koevermans on Saturday.

Nick Soolsma outmuscled a Union defender in the box and fed the ball to Koevermans at the near post. The big Dutch striker's first attempt bounced off goalie Chris Konopka, but he scored on with his second try.

"It's a big relief," said Toronto FC coach Aron Winter. "Finally, other questions for you all."

Koevermans came into the game in the 62nd minute, his third substitute appearances in four games since returning from a groin injury.

Toronto entered the game off a win against the Vancouver Whitecaps that game the club a fourth straight Voyageurs Cup as Canadian champion. Toronto has a three-week break due to the next round of World Cup qualifiers.

"I'm extremely disappointed with our performance," said Union coach Peter Nowak. "We had a couple of good games where we played the way we wanted to play and today was completely opposite. Two steps forward and three steps back."

Philadelphia played without goalie Zac MacMath (concussion symptoms) and Chase Harrison (ankle sprain). Konopka filled in well in his first action of the season, until the end.

"I know the first half wasn't really going our way but at the end of the day we let in a goal in the 88th minute," he said. "When it gets that deep in the game you try any way you can to grind out a result. It's frustrating that we didn't get to do that today."

Neymar to undergo surgery in Brazil