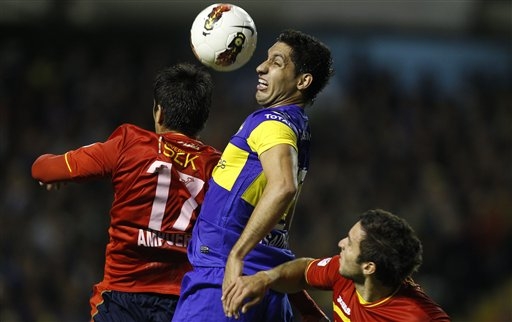 In other games, Vasco da Gama of Brazil also won 2-1 at home, over Argentina's Lanus, while ten-man Corinthians of Brazil drew 0-0 at Emelec of Ecuador.

Boca's Santiago Silva scored from a header in the final minute of normal time to give the Argentine club a narrow edge heading into next week's away leg.

Juan Roman Riquelme gave Boca the lead in the 25th with Union Espanola's Sebastian Jaime equalizing in the 73rd.

"At home it's always important to win, and we stayed patient at the end," Silva said.

Riquelme, whose goal went in off the inside of the far post, said "We're happy. We beat a team that played well and knows how the keep possession."

Union seldom mounted a serious threat in the first half against a Boca team which has relied on solid defending and the strong goalkeeping of Agustin Orion.

But against the run of play, Jaime broke into the area and beat Orion from 10 meters for what could prove to be a vital away goal.

Silva snatched back the advantage just 30 seconds from the end with a leaping header from a cross by Pablo Mouche. Neither team mounted much in the three minutes of stoppage time.

Boca has won the Copa Libertadores title six times and dominated in recent years, winning four times in the past decade — the last in 2007. Since then the popular Argentine club has stumbled and failed to be a threat on the continental stage.

In Rio de Janeiro, Alecsandro scored for Vasco in the 26th and Diego Souza added another on a volley in the 43rd.

Mario Regueiro scored an important away goal for Lanus in the 62nd. The two teams play the second leg next week in Argentina. Colombian striker Teofilo Gutierrez made his debut with Lanus after entering in the 72nd.

In Guayaquil, Ecuador, Corinthians finished with 10 men when Jorge Henrique was sent off the in the 52nd for his second yellow card. The scoreless draw gave the Brazilian club favoritism heading into next week's home leg.

Neymar to undergo surgery in Brazil