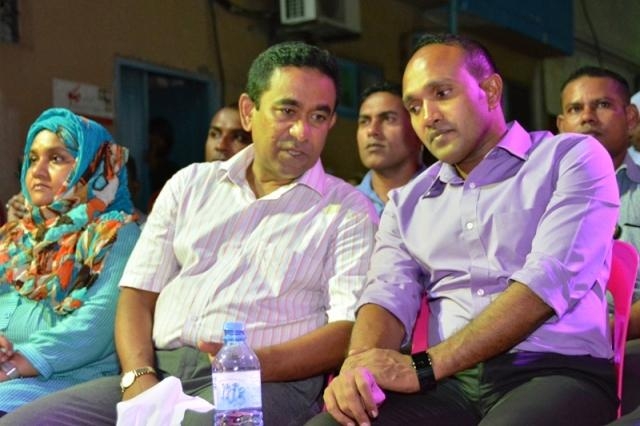 President Abdulla Yameen Abdul Gayoom has said that he wants to submit the files related to the alleged ‘$800 million fraud oil trade’ conducted via State Trading Organisation (STO) Singapore to the Anti-Corruption Commission (ACC), and have the case investigated while he is president.

Yameen made this remark while speaking at a celebration function held by Progressive Party of Maldives (PPM) near Thundukunaa Jagaha last night.

Yameen said that the President’s Office requested today to hand over the files of STO Singapore used by UK’s Grand Thorton for the investigation of the $800 million fraud oil trade to the government, and following this request, he requested that the files be handed over to ACC.

Yameen said that if the alleged $800 million can be claimed somehow, it would be ‘a gift to the people’.

He said that the investigation was halted during Nasheed’s government, probably because the allegation was baseless.

“The truth is, towards the end of Nasheed’s government, the company that investigated the case had filed it to Singapore Appeal Court. The case had been withdrawn from the court during Nasheed’s presidency, as requested by Nasheed, because there was nothing more to be investigated, no way forward. But until now, the government has not received any document that belongs to the company, that carries the company’s stamp. I went to Singapore twice and met with the lawyers,” he said.