MBC summoned to parliament committee over live broadcast of 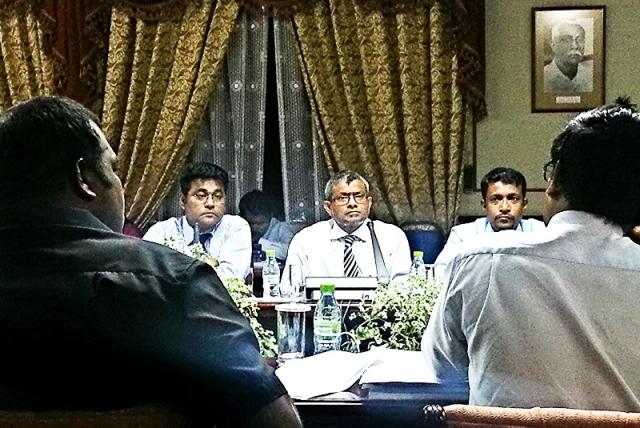 The committee has accused that Andhalus was an anti-campaign event against presidential candidate of Maldivian Democratic Party (MDP), Mohamed Nasheed.

The sub-committee of the Parliamentary Committee on Independent Institutions, to which the two institutions were summoned, is made up of Thoddoo MP Ali Waheed, Henveyru-South MP Hamid Abdul Gafoor and Thulusdhoo MP Rozaina Adam.

Speaking at the committee meeting this afternoon, Chairperson Hamid Abdul Gafoor said that the lecture organised by Jamiyya Salaf last night at Dharubaaruge was an anti-campaign event against a particular presidential candidate.

He said that the committee decided to investigate the matter after receiving several complaints.

He said that the live broadcast was allowed because it was organised by Jamiyya Salaf, and because the lecture was given by a person who were authorised to do so, and not by a politician.

He said that he did not believe that the purpose of the lecture was to use religion as a means to hold an anti-campaign activity against a particular candidate.

He however said that halfway into the lecture, at around 11:30 p.m., their editorial team cut off the live feed when the sheikh’s lecture took a different approach.

Referring to accusations that the content violated MBC’s guidelines, Manik said that this will only be known after the committee looks through the content.

President of Maldives Broadcasting Commission Mohamed Shaheeb said that the commission conducts checks to ensure that broadcasters’ content are in accordance with the Code of Practice, and that no complaints were received regarding last night’s lecture.

Last night’s lecture by Sheikh Shameem was focused on the lessons to be learned from the fall of the 800-year-old Islamic empire, Al Andhalus. This lecture was broadcast by four local TV stations.

Issues surrounding election cannot be solved through the parliament: Yameen